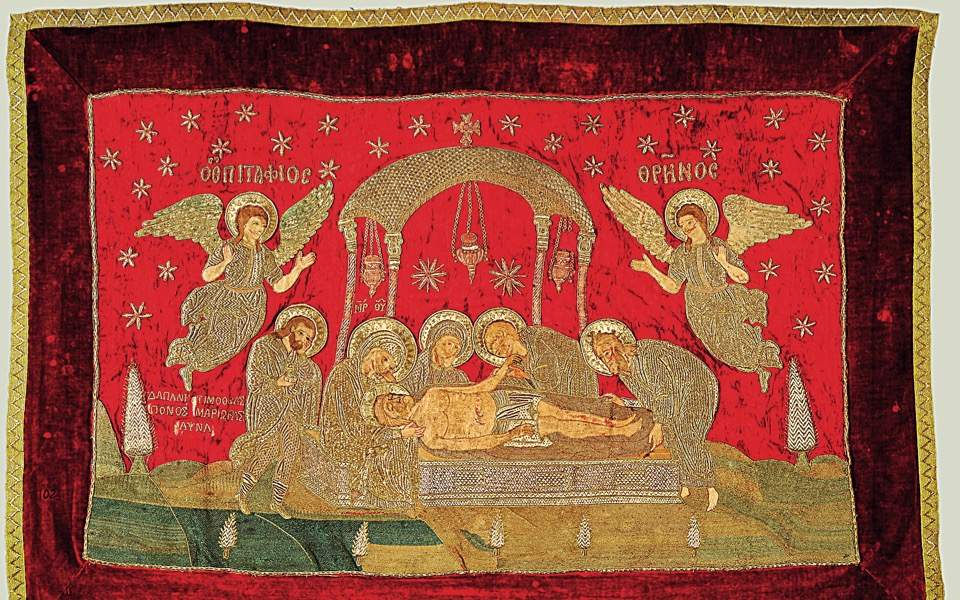 I first discovered Paddy through my interest in Roman and Byzantine history. In fact through the excellent three volume work, Byzantium, of Paddy’s great friend John Julius Norwich. Some of you know that I run a parallel blog about Byzantium, and I thought that on this occasion I would share a recent post; I wondered how both Paddy and John Julius might have enjoyed it, and so, I hope, do you. If nothing else the music is sublime

In time for this (Orthodox) holy week period, the Byzantine and Christian Museum in Athens is offering a digital tour of some of its best works.

This gold-embroidered Epitaphios (liturgical vestment) dated to 1751 from the famous workshop of Mariora in Constantinople stands out among other exquisite works of art in this digital exhibition which draws on the collections of the Byzantine and Christian Museum in Athens. Hidden in its linings, conservators found the original signatures of the embroiderer and of the person that donated it – Mariora and Timothea. The masterpiece of Byzantine art is a long-term loan from the Exarchate of Jerusalem in Athens.

The digital exhibition, which visitors to the museum’s website can view this week, is a 33-minute video featuring 95 works from the museum’s collections on the Passion, Burial and Resurrection of Christ, and is accompanied by some wonderful music.

This unique digital presentation of museum objects of different places, eras, styles and materials aspires to contribute to a more comprehensive understanding of the centuries-old illustration of the leading events of the Divine Economy, as described in the Scriptures. The works, mostly portable icons, are thematically distributed according to the chronological sequence of historical events and their theological symbolism, beginning with Lazarus’ Sabbath and ending with Easter Sunday.

There is a very rare opportunity to purchase the hugely enjoyable and authoritative  complete and unabridged audiobook of John Julius Norwich’s “A Short History of Byzantium”, brilliantly narrated by John McDonough. From its beginnings in A.D. 330, this audiobook provides listeners with a spirited, gripping, and original account of a great lost civilization and its magnificent artistic heritage. The audiobook consists of 16 cassettes in very good condition offering 23.5 hours listening time. I have listened to them and they are all in excellent order. This was a library copy, but clearly barely ever issued or played. If you love Byzantine history you will enjoy this.

The best way to preserve the audio is to convert to a MP3 format on your PC or Mac and retain it in your iTunes or similar to listen from iTunes etc. It is a very simple process. You can purchase converters for very modest cost on Amazon – see here.

I have searched around and not found this audio format anywhere else. This is very rare.

If you are interested in purchasing, please email me tsawford[at]btinternet.com with your best offer. It will be possible to post this to international locations with cost to be confirmed. Payment by PayPal.

Paddy Leigh Fermor has lived one of the great picaresque lives of the 20th century. He left a minor public school under heavy clouds with no money and a penchant for wandering. From 1934, for five years, he sustained a lotus existence in eastern Europe and the Balkans, by charm, genteel begging and Byronic good looks. His parents must have despaired of him during this longest gap year in history.

One of Evelyn Waugh’s characters observed in 1939: “It’s going to be a long war. The great thing is to spend it with friends.” Leigh Fermor pursued this policy with notable success. His 18 months as a British agent in Crete made him a legend, not least for the kidnapping of the German General Kreipe, theme of the later film Ill Met By Moonlight.

After the war, Paddy resumed his leisurely course. One can no more imagine him occupying an office desk, queueing for the weekly envelope, than some marvellous beast of the African bush taking up employment as a security guard. He wandered the world until, in 1950, he suddenly produced a small literary masterpiece about the Caribbean, The Traveller’s Tree.

Thereafter, at irregular intervals, he has written travel books and fragments of autobiography. On his visits to England, rural grandees and metropolitan hostesses fight for the privilege of his society. The home he created with his wife Joan on the south shore of the Peloponnese at Kardamyli is a small work of art in its own right, owing much to their pets, or – as he writes here – to four-footed “downholsterers and interior desecrators”. How he loves language and words!

What is charm? In Leigh Fermor’s case it is an infinite curiosity about other people. He treats Bulgarian peasants and English dukes exactly alike. John Betjeman once spoke of Paddy “sitting there listening to you, his eyes sparkling with excitement as he waited to hear what you might say next”. Generosity of spirit is among his notable qualities.