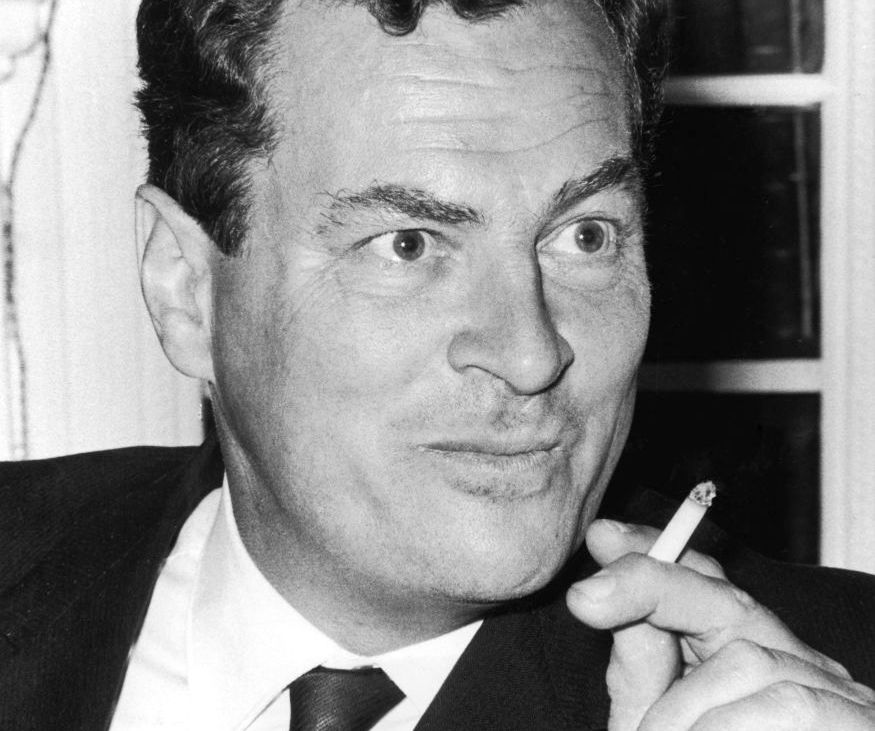 Paddy sent this letter to Deborah Devonshire in October 1960, having completed a road trip through the Balkans. Read more of their letters in Dashing for the Post: The Letters of Patrick Leigh Fermor

Off we set in Joan’s Sunbeam Rapier, hood down, singing at the wheel, heading from Le Touquet to our old friend Lady Smart’s, spent three days there, then into a deserted dusty summer Paris, so bare that it might have been emptied by a Bedouin raid, and south to Fontainebleau, for a further three days of utmost luxury and pleasure at your old pal Charles de Noailles and Natalie’s house … Then off hot wheel eastwards to Chatillon-sur-Marne, to see the Vix Vase, a huge Greco-Etruscan amphora dug up seven years ago …

Then across the Rhine, through the Black Forest, one night on the shores of Lake Constance surrounded by Germans; south into the Austrian Tyrol, on into Italy at Bolzano, then clean through the Dolomites, hundreds of miles of sheer and dizzy spikes a-gush with streams out of which beautiful trout virtually leap straight on to frying pan, grill and saucepan; north of Venice into Yugoslavia at last; through Slovenia to Lubliana, through Croatia to Zagreb, then east along a billiard table autostrada towards Belgrade. Now, a travel tip for motoring in Yugoslavia: there are only about three petrol pumps the country, and scarcely any motors. We ran out hundreds of miles from one on this autostrada in the heat of the day and settled for hours under an acacia tree … until at last a caravan of twelve Cadillacs drew up and succoured us by siphoning petrol out of their tanks. They were a party of Persian princes with their sloe-eyed princesses on the way from Claridge’s to Teheran. They partook freely of our wine flask, asked us to stay in their palaces (the competition began to look ugly) and then slipped into gear for Iran.

We continued south into wildest Bosnia, where mountains began to rise and minarets to sprout in every village, each alive with Moslem invocations intoned thrice daily. The roads became dust tracks across plains or twisty ledges of rubble little wider than eyebrows along the rims of deep gorges at the bottom of which huge rivers curled and swooped through echoing and forested ravines, with here and there an old Turkish bridge spanning them as thinly and insubstantially as a rainbow. The food became odd and wonderful, stuffed with garlic and paprika and the sunlight and our breath got stronger with every mile. So on to Sarajevo, scene of the Archduke’s murder, and, through range after range of mountains to Dubrovnik on the Dalmatian coast, a terrific medieval walled city full of renaissance palaces and belfries and winding columns and cloisters, and oysters too—huge and wonderful ones. South of this is the old kingdom of Montenegro, now part of Yugoslavia, reached after a three-hour zigzag up a sheer and cloud-topped wall of mountain, looking down on to strange rock fjords caked with water lilies and with pyramid-shaped mountains that hover on mist like the ones in Japanese pictures, and plenty of gliding storks …

Into Greek Macedonia at last, and then by familiar roads to Athens … a colossal road is being built outside, with fifty pneumatic drills, giant steel claws for rubble, hydraulic pumps, steamrollers and blasphemy. One has to talk in bellows. I have now bought some pink wax ear plugs, which makes everything even eerier. I see massed drills a-shudder, rollers a-crunch, and ten tons of broken concrete crashing from suddenly gaping steel claws all only a few yards off, and all in dead silence; lorries hurtle by as soundlessly as minnows. Meanwhile, one’s heart sounds like a steam hammer, and one’s own steps like nail-clad footfalls in a cathedral.

Published in The Paris Review

Paddy Leigh Fermor has lived one of the great picaresque lives of the 20th century. He left a minor public school under heavy clouds with no money and a penchant for wandering. From 1934, for five years, he sustained a lotus existence in eastern Europe and the Balkans, by charm, genteel begging and Byronic good looks. His parents must have despaired of him during this longest gap year in history.

One of Evelyn Waugh’s characters observed in 1939: “It’s going to be a long war. The great thing is to spend it with friends.” Leigh Fermor pursued this policy with notable success. His 18 months as a British agent in Crete made him a legend, not least for the kidnapping of the German General Kreipe, theme of the later film Ill Met By Moonlight.

After the war, Paddy resumed his leisurely course. One can no more imagine him occupying an office desk, queueing for the weekly envelope, than some marvellous beast of the African bush taking up employment as a security guard. He wandered the world until, in 1950, he suddenly produced a small literary masterpiece about the Caribbean, The Traveller’s Tree.

Thereafter, at irregular intervals, he has written travel books and fragments of autobiography. On his visits to England, rural grandees and metropolitan hostesses fight for the privilege of his society. The home he created with his wife Joan on the south shore of the Peloponnese at Kardamyli is a small work of art in its own right, owing much to their pets, or – as he writes here – to four-footed “downholsterers and interior desecrators”. How he loves language and words!

What is charm? In Leigh Fermor’s case it is an infinite curiosity about other people. He treats Bulgarian peasants and English dukes exactly alike. John Betjeman once spoke of Paddy “sitting there listening to you, his eyes sparkling with excitement as he waited to hear what you might say next”. Generosity of spirit is among his notable qualities.