The second in the series which presents the work of members of the Royal Geographical Society which analyses chapter by chapter, literary and historical references from some of Paddy’s key works.

This was presented at the RGS in the afternoon talk on 12 December 2012,”Patrick Leigh Fermor: An Appreciation by Alexander Maitland, FRGS”.

My thanks to the Royal Geographic Society for permission to present this. 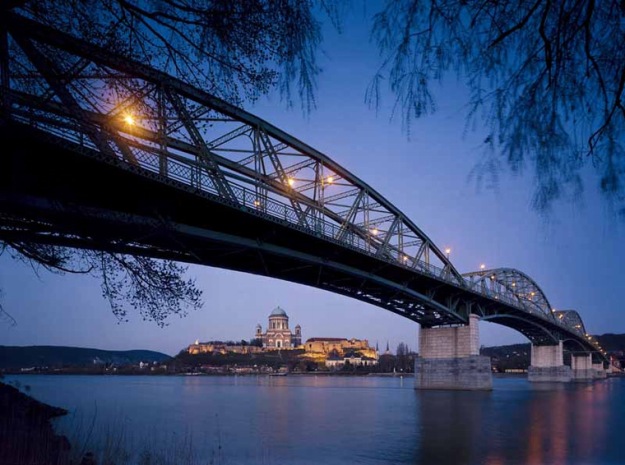 It took Paddy until Easter 1934 to get to this bridge. Nick is moving well now. The bridge at Esztergom was one of my first blog posts back in April 2010!

The bridge linking Slovakia and Hungary, between the towns of Štúrovo and Esztergom, also links A Time of Giftsand Between the Woods and the Water. Here Paddy paused both in his walking and his writing, ‘meditatively poised in no man’s air,’ before crossing into Hungary and the second phase of his journey.

I reached that bridge a week ago (or rather the reconstruction of that bridge — the original was destroyed in 1944), and in a rather unbelievable way came to the very last page of my notebook standing above the Danube … read more

As you know I trawl the net for Paddy related material to create the best online source of information about PLF and his friends and associates. Some of you may have come across this essay that attempts to analyse Paddy’s style and his literary achievement. In my view it is just one of many that emphasise how great the man is and how unequalled is his prose.

I have carried the soldier’s musket, the traveler’s stick, the pilgrim’s staff. –Chateaubriand (what a great quote for Paddy!)

The captive must have been exhausted and afraid, but when, on the fourth day of his grueling forced march across Crete, he saw dawn break behind Mount Ida, the sight was so beautiful that it brought to his lips the opening of Horace’s Ode I.ix: “Vides ut alta stet nive candidum/ Soracte,”(1) he murmured. Then, just as he trailed off, one of his captors came in to take the poem over, reciting the rest of its six stanzas. At this, the captive’s startled eyes slanted down from the peak to meet those of his enemy, and, after a long thoughtful silence, he pronounced, “Ach so, Herr Major.” For the captive was a German soldier–the commander of the island’s garrison, no less. General Karl Kreipe (to give him his name) had been abducted on April 26, 1944 by a band of Greek guerrillas led by two English commandos. Over the next three weeks, the kidnappers picked their way across Crete, eluding the thousands of Nazi troops who hunted them, until eventually they were met by a British boat and whisked to Cairo, where Kreipe was handed over and the two commandos promptly awarded the D.S.O. One of these men was W. Stanley Moss, who in 1950 published a riveting account of the escapade, Ill-Met by Moonlight, later filmed by Michael Powell. The other was a certain Patrick Leigh Fermor. Disguised as a shepherd and (like Zeus in his Cretan boyhood) living largely in caves, he had spent much of the previous two years on the island organizing the resistance. Leigh Fermor it was who finished the quotation.

But where had he, who’d never completed high school, learned Horace so well? Had Kreipe asked him this, Leigh Fermor could have answered, savoring the irony, that he’d committed the odes to memory during his teenage Wanderjahr a decade earlier, when, just after Hitler’s rise to power, he’d walked clear across Germany (among other countries) with a volume of Horace for his vade mecum, often reciting the poems to himself as he tramped. About that experience he’d not yet written a public word, and would not do so for many more years. Similarly he held off recounting his aubade with Kreipe. At last, however, in the 1970s, he broached the subjects of his continental traverse and, in an aside to that account, of his fleeting bond with Kreipe. Some things are best waited for: the book in which Leigh Fermor set these matters down, A Time of Gifts (1977), along with its sequel, Between the Woods and the Water (1986), represent not only the capstone of his career but, in my opinion, the finest travel books in the language and a pinnacle of modern English prose, resplendent as Soracte or Ida in deep snow.

The deplorable fact that most Americans, even well-read ones, have never even heard, as I also had not until recently, of a figure who in Britain (to say nothing of Greece, where he lives to this day) is revered and beloved as war hero, author, and bon vivant; who is, in Jan Morris’s words, “beyond cavil the greatest of living travel writers”; and who, in those of the historian John Julius Norwich, “writes English as well as anyone alive”–all this spurs me to correct our oversight of the sublime, the peerless Patrick Leigh Fermor.

His turbulent early life is recounted in the introduction to A Time of Gifts. Shortly after his birth in 1915, his mother and sister went to join his father in India, while he was left behind “so that one of us might survive if the ship were sunk by a submarine.” For four years he was billeted with a Northamptonshire farming family, an experience that proved “the opposite of the ordeal Kipling describes in Baa Baa Black Sheep.” A halcyon period, this, but the taste for boisterous freedom he acquired in the fields made for trouble later on: “Those marvelously lawless years, it seems, had unfitted me for the faintest shadow of constraint.” Especially intolerable to him were academic strictures of any kind, and there ensued a long series of dust-ups and expulsions, hilariously related. At ten he was sent to “a school for difficult children,” among which misfits he lists

the millionaire’s nephew who chased motorcars along country lanes with a stick, the admiral’s pretty and slightly kleptomaniac daughter, the pursuivant’s son with nightmares and an infectious inherited passion for heraldry, the backward, the somnambulists … and, finally, the small bad hats like me who were merely very naughty. END_OF_DOCUMENT_TOKEN_TO_BE_REPLACED