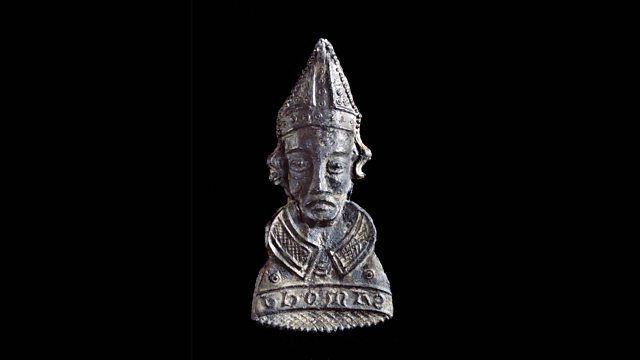 Are those of us who are locked down like those in medieval times who coud not actually go on pligrimage and were only able to imagine it?

In the always fascinating BBC Radio 4 programme, In Our Time, Melvyn Bragg (who in 1989 interviewed Paddy on The South Bank Show – short extract here) and guests discuss the rise of pilgrimage for Christians in Europe in the Middle Ages and options for those who could only imagine pilgrimages and imitate them at home.

The podcast archives go back many years, divided into categories like ‘Culture’, ‘Religion’ and ‘History’. The Margery Kempe and Thomas Becket episodes are brilliant too, both linked to pilgrimage.

Lock yourself away and give 45 minutes to fascinating discussion, where you are sure to learn a few things.

Listen to the episode here.

There are almost 900 episodes in the In Our Time archive which you can browse here.

The Clarendon Way from Winchester to Salisbury

I hope that you are all well and starting to enjoy getting out and about after the lockdowns. Many restrictions remain in place, varying country by country, and there is definitely uncertainty about travelling to other countries. I recently tried a bit of a long distance walk, but it is difficult with no real hospitality available for bed, or board, or even water which was much needed here in England as recent temperatures have been very high; only three Summers have had as much sunlight as this Spring here in England since sunlight records began, I think, in 1923.

In the autumn of 2017, having some time on my hands I decided to make one of my “step out of the door journeys”, taking a pack and a good pair of boots to make my own pilgrimage to somewhere. I like these journeys. They may not be exotic, but as a walker you really feel and experience the ground, the sounds and smells all round you. You see things that travellers on other modes of transport do not, meet and get to talk to people as you pass by, and make your own journey, unconstrained by way-marked walks, just using footpaths that take you in the direction you wish to go.

This journey was to be a “pilgrimage” from Winchester (from my door via the cathedral) to Salisbury cathedral, to the tiny city of Wells with its magnificent cathedral, thence on to the head of the River Exe via the ancient and mysterious holy place of Glastonbury, down the river valley to Exeter and its Gothic cathedral. It took me seven days of walking.

Day 1 – Winchester to Salisbury 34km. Slept in Sarum College (they will do low cost accommodation) with the best location in Salisbury right in the enormous Cathedral Close. This is a pleasant if long first day along the soft beech lined route of the Clarendon Way via Kings’ Sombourne and the River Test.

Day 2 – Wilton to Maiden Bradley 38 km. A short taxi ride out of the city to Wilton and up out striking west through a very large forest with a straight Roman road running through the middle for miles and miles. I barely saw a soul; Wiltshire can be bleak and is very sparsely populated in the rural areas. I ended up at a place called Maiden Bradley, the only place around with accommodation which turned out to be full. Taxi to Frome to find B&B and a hot meal.

Day 3 – Frome to Wells 36 km. A lovely walk in the sunshine after the “harshness” of Wiltshire the day before. I caught my first glimpse in the distance of Glastonbury Tor, an objective for the next walking day. I ended up in Wells just after dusk and stayed in a hotel in the gatehouse of the cathedral close. The next day I took some RnR and looked around the Bishops’ Palace, the cathedral school close, and the ornate cathedral itself. Really worth a day out if you can make it.

Day 4 – Wells to Glastonbury 18 km. A short walk on the Somerset levels to the magical Tor with its magnificent 360 views. I could even see Wells cathedral in the distance. The town itself is a strange place with more shops selling crystals and other “magical” things than I have ever seen. One bookshop had a window display devoted to whittling wood! The next leg was to be to Bridgwater. I had agreed a rendezvous with a friend for a cup of tea and needed to push on, but the maze of drainage ditches and the flat emptiness of the Levels was at the same time going to take some time to navigate and was not an attractive prospect so I took a bus to Bridgwater which is a pretty enough town with statues to men who had struck out for the New World and brought trade to this place. Grabbing a coffee the next morning from Starbucks a lady there was celebrating 10 years’ service as a barista. Good on her; she was happy in her work.

The stag that got away

Day 5 – Bridgwater to Wivelescombe 31 km. The landscape changed as I approached Exmoor National Park, meeting a lady from Surrey who had settled in a village but was unhappy as the locals did not easily accept incomers. The day was dominated by coming across a stag hunt. Riders everywhere, with scouts on quad bikes and in 4x4s using walkie-talkies to direct the hunt. The stag kept well ahead of the huntsmen and women who often ended up in the wrong place. They were suspicious of me with my camera but polite. At one point the stag charged out of undergrowth just a couple of hundred yards from me, pursued by just two hounds. With quick reactions I was able to get a shot of the stag in flight running for a small valley full of trees and bushes, well away from the main body of the hunt. I probably saw more of the stag that day than did most of the hunters. Wivelescombe is a tiny village in the middle of nowhere but had a welcoming inn.

Day 6 Wivelescombe to Tiverton 31 km. A pleasant if unmemorable day of walking with nothing really standing out. Tiverton had clearly been a prosperous place in the past with its wealth being founded on the wool trade, having some very ornate public buildings. It is now dominated by the Heathcote textiles factory and many pubs. I experienced my first Wetherspoons drink and meal. A pint of beer being just £2.40, and a special “curry night’ meal and a pint for £5.99!

Day 7 Tiverton to Exeter 28 km. A pleasant enough walk but my vision of a lovely walk along the banks of the River Exe were not to be. There is no path as such, and a lot of time was spent high up looking down into the valley and walking on roads. It was a little disheartening to see that the final push into Exeter meant a steep climb up to the hill that bears the Roman signal station, or a very long walk around. I chose straight up and eventually found myself walking through the small suburbs of the city, into the ugly modern centre (Exeter was badly bombed by the Germans in April and May 1942 as part of the so-called “Baedeker raids”, in which targets were chosen for their cultural and historical, rather than their strategic or military, value). My goal, the cathedral was worth it, and afterwards, having a pint in a nearby pub, I bumped into an officer serving in the same Regiment as my son, and his fiancé, who were to be wed in Exeter the next day. It was a very good way to end my 216 km (134 mile) odyssey.

If you are able, I thoroughly recommend this mode of walking. Have an idea of a place to walk to. Grab a few Ordnance Survey maps and plot a route with accommodation stops on the way. I was very ably assisted by Booking.com, only making my bookings during the afternoon of my planned stay to ensure I knew that I would make a location. 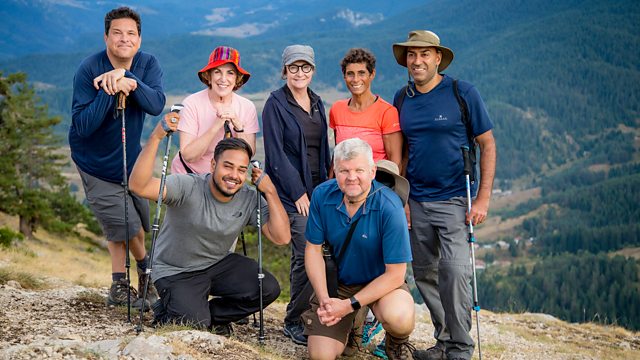 O calm of hills above,

The silence of eternity,

The third verse of John Greenleaf Whittier’s hymn, Dear Lord and Father of Mankind, describes perfectly the scene today as I commenced my Holy Land pilgrimage. It is a calm place and as dawn broke this morning the mist that covered the Sea of Galilee slowly lifted revealing the hills of the Golan Heights to our East. I enjoyed the freedom of running by the lake and taking an impromptu swim.

The lake, so smooth and calm, is intimately associated with the life and teaching of Christ, and of many of his disciples, including Simon-Peter, who were fisherman from the area of Capernaum. The road over the hills from Nazareth through the Valley of the Pigeons ends at the village of Magdala. Jesus took that road on his journey to Galilee and it was at Magdala that he first met Mary whom we know as Magdalen.

I will write short dispatches, internet access permitting, for both my blogs as my journey progresses. As one correspondent said to me in an email recently, I do manage to stretch the point sometime, and my excuse for posting on both blogs is that there will be some direct relevance to MyByzantine blog, but for my Patrick Leigh Fermor blog the point is much less clear! As far as I know Paddy never visited Israel – I now expect corrections! – but he does love churches, and religious art, and I shall be seeing much of that in the next few days, so I think (and hope) Paddy might approve!