Apologies for a second post so soon but it appears that in tonight’s episode Joanna will visit Crete and according to the blurb ‘… in the high remote mountains she spends time with the shepherds who played a key role fighting the Nazi occupation alongside British SOE Agent, Patrick Leigh Fermor – whose exploits became the basis for the film Ill Met by Moonlight.’ Don’t expect too much accuracy but I am sure that there will be oodles of gushing admiration for Paddy.

Apparently ‘… Crete is also the birth place of Zeus and the home of raki, a local firewater that fuels traditional festivities.’ Enjoy but only available in the UK … and I am currently in Romania. 😦 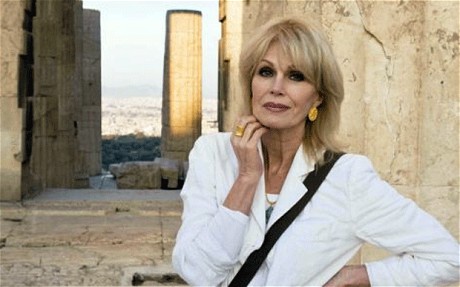 Let’s have a nice interlude from Crete and the Kreipe abduction and follow the ever lovely, and not too intellectually taxing Joanna Lumley as she experiences an ‘Odyssey’ through and across Greece, the country that Paddy loved so much. She may come out with blinding glimpses of the obvious – about Byron “he was one of our greatest poets” and “his mind was full of poetry” – but when she meets an old man who was the only survivor of a Turkish massacre her tears are as genuine as can be. She is a British National Treasure and she is in one of the most beautiful countries in the world.

You can catch up with the whole series here on ITV Player.