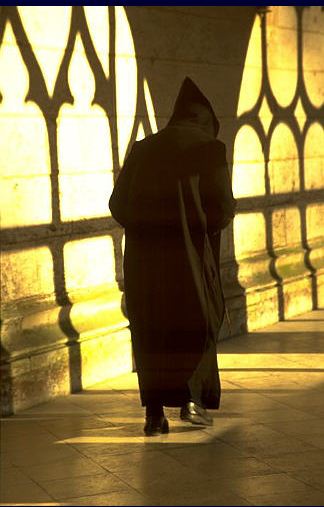 On this tenth anniversary of 9/11.

Conventual High Mass was at ten every morning, immediately after Tierce. The beginning of this office was austere enough: the same silent entry of the monks, the same taking up of positions in the stalls that I had seen the first day at Vespers. At a tap from the Abbot, the monks stooped almost double in silent prayer, their rows of tonsures appearing for a minute on either side of the aisle like tiers of discs.(Their heads were shaved once a fortnight. One day their scalps were as blue as burglars’ jowls; the next freshly pollarded and gleaming in their circles of hair.) All the canonical hours began in the same way: ‘Deus in adjutorium’, the hebdomadary monk’s voice sang on one note, ‘intende.’ ‘Domine’, the rest intoned in unison, ‘ad adjuvandum me festina.’ A hymn followed, one of those short poems with four-line verses in the Latin of the early church, sung to an unseizable little tune. Then, sitting back in their stalls, the monks chanted the morning psalms in antiphony, the Gregorian music booming from opposite sides of the chapel as each verse of St Jerome’s Latin succeeded its forerunner. Tierce ended, the officiating monk entered in his vestements, and the deacon and sub-deacon, the acolytes and torch-bearers. They genuflected together, and the Mass began. Every moment the ceremony gained in splendour. If it was the feast of a great saint, the enthroned abbot was arrayed by the myrmidons in the pontificalia. A gold mitre was placed on his head, and the gloved hand that held the crosier was jewelled at the point of the stigmata and on the third finger the great ring sparkled over the fabric. The thurifer approached the celebrant and a column of incense climbed into the air, growing and spreading like an elm-tree of smoke across the shafts of sunlight. The chanting became steadily more complex, led by a choir of monks who stood in the middle of the aisle, their voices limning chants that the black Gregorian block-notes, with their comet-like tails and Moorish-looking arabesques, wove and rewove across the threads of the antique four-line clef on the pages of their graduals. Then, with a quiet solemnity, the monks streamed into the cloister in the wake of a jewelled cross. Slowly they proceeded through the cylinders of gold into which the Gothic tracery cut the sunlight. Their footfalls made no noise and only the ring of the crosier’s butt on the flags and the clanging of the censer could be heard across the Greogorian. The procession reached the shadow-side, pausing a few minutes while the sixty voices sailed out over the tree-tops; and then back through the church door, where arcs and parentheses of smoke from the burning gums, after the sunlit quadrangle, deepened the vaulted shadows. The antiphonal singing from the stalls continued to build its invisible architecture of music: a scaffolding that sent columns of plainsong soaring upwards, to be completed by an anthem from the choir that roofed it like a canopy. The anthem was followed by a long stillness which seemed to be scooped out of the very heart of the sound. After long minutes, a small bell rang and then the great bell from the tower which told of the rites that were being celebrated and the mysterious events taking place; and the heads of the monks fell as if one blow had scythed them away. Next, an unwinding, a decrescendo. The Mass sang itself out, the kiss of peace passed like a whispered message down the stalls, the officiating court dispersed, and the vestements were removed. A monk extinguishing the candles, the hood went up, the Abbot intoned the opening verse of Sext and still on the same note, the response came booming back …

[Note: there are no paragraph breaks as that is how Paddy wrote this piece; 628 words and he really does not want to finish there! Paddy is writing about the Abbey of St Wandrille]