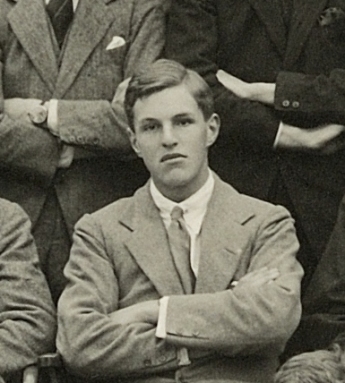 He was the only son of Herbert Stringfellow Pendlebury FRCS, a consulting surgeon at St. George’s Hospital and then of the Royal Waterloo Hospital in London. John Pendlebury’s mother was Lilian Dorothea, the daughter of Sir Thomas Lane Devitt, 1st Baronet, and Chairman of Lloyd’s Register of Shipping. However, she died in 1921, and in 1925 Herbert Pendlebury married Mabel Webb, daughter of Mr. Richard Webb of Wanganui, New Zealand.

John Pendlebury was successful at school: he won the Leslie Hunter Prize, was Head of House, in Senior Division, Sixth Book, and gained an Exhibition for Classics at Pembroke, Cambridge (his father’s college). All this was despite the loss of an eye: “One of his eyes, lost as a child, had been replaced by a glass one. I heard later that, when out of his office, he used to leave it on his table to show that he would be back soon.”

At Winchester, he won the high jump (twice) and the hurdles. In his third year at Cambridge he won the high jump at Fenner’s and also against Oxford. In 1927 he leaped to fame with a jump of six feet at Queen’s Club, breaking the record set by M J Brooks over 50 years before. He also represented England that year. He then won a Scholarship at Pembroke College and a First in the Classical Tripos, Part II with special distinction in Archaeology. Later that year he went to the British School of Archaeology at Athens. That year he married Hilda White, daughter of Edmund White, of Caldy, Wirral.

He quickly gained an international reputation as an archaeologist and donated some of his finds to the College, where they are still held in the Treasury. In 1932 he was appointed Neil Lecturer at Pembroke, and a Fellow of the Royal Society of Antiquaries and a Fellow of the Royal Society. That year he and his wife had a son, David John Stringfellow Pendlebury (D 1945-1950), and later a daughter.

He excavated in Macedonia, at Tel el Amarna (where he was Director from 1930 to 1936), at Knossos in Crete (where he was Curator 1930-35), and at Mount Dicte (also in Crete). His publications included “Aegyptiaca” (1930), “Handbook to the Palace of Minos” and “Tel el Amarna” (1935), and “The Archaeology of Crete” (1939). Pendlebury discovered many ancient sites in Crete, an island which he knew better than any other Englishman. “He was on excellent but independent terms with Sir Arthur Evans but, when he was away from Knossos and the Villa Ariadne, he was constantly on the move. He got to know the island inside out. No peak was too high or canyon too deep for him to claw his way up or down. He spent days above the clouds and walked over a thousand miles in a single archaeological season. His companions were shepherds and mountain villagers. His brand of toughness and style and humour was exactly right for these indestructible men. He knew all their dialects and rhyming couplets. Micky Akoumianakis, the son of Sir Arthur’s overseer, told me he could drink everyone under the table and then stride across three mountain ranges without turning a hair.” (Speech delivered by Sir Patrick Leigh Fermor on the 60th Anniversary of the Battle of Crete – reprinted in The Spectator 20th October 2001).

During the war he served as an officer in the Intellegence Corps. Commissioned into the cavalry, he was transferred in May 1940 to MI(R), the forerunner to the Special Operations Executive. SOE was formed in July 1940 and Pendlebury worked for the organisation for the rest of his life.

The British were expecting Greece to be attacked by Italy in the near future and assembled a group of Greek supporters to help with resistence in the event of being over-run. Pendlebury was one of these. The Greek nationals were however suspicious of the mission and its motives and refused to allow some of the party into the country, although Pendlebury was known and trusted and was allowed in. In November 1940, 50 Commando was sent to Crete to garrison the strategic harbour of Suda Bay. This freed up Greek troops to move to the Italian front. They arrived on November 26th, only to find that their orders had been changed and that they were to move to Heraklion. There Pendlebury met them, fixing up good billets for them in a school, a tobacco factory, and barrack buildings on the airfield. With 50 Commando, Pendlebury became involved in operations against Axis targets in the surrounding waters: “Pendlebury and the Cretans made guerrilla strikes on Kasos, the Dodecanesian island twenty-five miles from the easternmost cape, and there was a far-flung caique operation on Castellorizo, off the south coast of Turkey.” (Leigh Fermor).

In April 1941, the Germans intervened in Greece to support their faltering Italian allies. Greece was soon over-run and most of the Commonwealth troops who had fought there ended up in Crete. It was obvious that the Germans would attack the island next. Pendlebury slipped across to Kasos again to try to find out from his spies there exactly when the Germans would launch their operation. This would have been valuable intelligence, since although, through Enigma intercepts, the Allied commander, Major General Bernard Freyburg (2nd New Zealand Expeditionary Force, in command of the Allies on the island, knew the date and time already, he could not use the information for fear of giving away its source. However, it was too late. As Pendlebury reached Heraklion on May 21st 1941, the invasion was already under way. Ultimately, the German landings at Heraklion and Rethymnon were unsuccessful, disastrously so, and at Heraklion the Cretans played a huge role in the success of the defence: “Heraklion is a great walled Venetian city. The enemy forced an entry through the Canea Gate, and after fierce fighting they were driven out by the British and Greeks with very heavy losses. This was the first astonishing appearance of Cretan civilians, armed only with odds and ends – old men long retired and boys below military age, even women here and there – suddenly fighting by our side, all over the island. In Heraklion the swastika flag, which had briefly been run up over the harbour, was torn down again. The wall was manned by Greek and British riflemen, successful counter-attacks were launched and, apart from this one break-in, the town and the aerodrome remained firmly in our hands until the end… The battle raged on. Heraklion stood firm and we had similar tidings from the Australians and Greeks defending Rethymnon. After the lines of communication had been cut, we had no glimmer of the turn things were taking in Maleme over in the west. We thought we had won. The news became still more bitter later on, when we learnt that the enemy casualties had been so heavy that for a long time they had considered abandoning the campaign.” (Leigh Fermor).

Pendlebury visted the British headquarters at Heraklion where Leigh Fermor met him for the only time: “It must have been during a lull in this racket that I saw Pendlebury for the first and only time. ‘One man stood out from all the others that came to the cave,’ I wrote later on. I was enormously impressed by that splendid figure, with a rifle slung like a Cretan mountaineer’s, a cartridge belt round his middle, and armed with a leather-covered sword-stick… He had come to see the Brigadier to find out how he and his friends could best contribute, and his presence, with his alternating seriousness and laughter, spread a feeling of optimism and spirit. It shed light in the dark cave and made everything seem possible. When he got up to go, someone said, ‘Do show us your sword-stick!’ He smiled obligingly, drew it with comic drama and flashed it round with a twist of the wrist. Then he slotted it back and climbed up into the sunlight with a cheery wave. I can’t remember a word he said, but one could understand why everyone trusted, revered and loved him.

After leaving the cave, Pendlebury and Satanas headed for the Kapetan’s high village of Krousonas by different routes. They hoped to launch flank attacks on the steadily growing throng of dropped parachutists west of Heraklion. He got out of the car with a Cretan comrade and climbed a spur to look down on the German position. They were closer than he thought and opened fire. Pendlebury and his friend fired back.

Here the fog of battle begins to cloud things. Pendlebury and a Greek platoon were still exchanging fire with the Germans when a new wave of Stukas came over and Pendlebury was wounded in the chest. He was carried into a cottage, which belonged to one of his followers, George Drossoulakis, who was fighting elsewhere and was killed that same day. But his wife Aristeia took him in and he was laid on a bed.” (Leigh Fermor).

The Germans then occupied the area, Kaminia, near Heraklion. “The place was overrun with Germans; nevertheless, one of them, who was a doctor, cleaned and bandaged the wound. Another came in later and gave him an injection. He was chivalrously treated. The next morning he told the women of the house to leave him. They refused and were later led away as prisoners. A field gun was set up just outside… and a fresh party of parachutists was soon in the house.” (Leigh Fermor).

The arrival of the second group of Germans signalled the end for Pendlebury. “Here was an English soldier dressed in a Greek shirt and with no identification. A neighbour’s wife saw them take him out and prop him against the wall. Three times they shouted a question at him, which she couldn’t understand. Three times he answered ‘No’. They ordered him to stand to attention and then opened fire. He fell dead, shot through the head and the body.”

His fate was uncertain for many years and was only properly established decades later. “Much later we learnt what happened to Pendlebury. At first his body was buried near the spot where he fell. Later, the Germans moved him to half a mile outside the Canea Gate beside the Rethymnon road. I remember bicycling past his grave the following year dressed as a cattle-dealer. It was marked with a wooden cross with his name on it, followed by ‘Britischer Hauptmann’. There was a bunch of flowers, and new ones were put there every day until the enemy shifted the grave to somewhere less central…

Meanwhile legends were springing up. For the Cretans, it was the loss of an ally and a friend with a status close to that of Ares or Apollo. For the enemy, he was a baleful and sinister figure, a darker T.E. Lawrence, and perhaps he was still lurking in the dreaded mountains. Many bodies were exhumed until a skull with a glass eye was dug up and sent to Berlin – or so they said. According to island gossip, Hitler had been unable to sleep at night for fear of this terrible incubus, and kept the trophy on his desk. To the SOE officers who were sent to Crete to help the Resistance, he was an inspiration. His memory turned all his old companions into immediate allies. We were among friends. Pendebury – Pedeboor – Pembury – however it was pronounced, eyes kindled at the sound.”

The official family announcement of Pendlebury’s death in The Times, on June 2nd 1942, ended with words taken from Horace (Odes I.24): “quis desiderio sit pudor aut modus tam cari capitis.” [What restraint or limit to grief should there be for a man so beloved?]

Pendlebury was eventually buried in grave 10.E.13 of the Suda Bay War Cemetery, Crete. The inscription on his tombstone reads: “He has outsoared the shadow of our Night”, a quotation from Adonais: “An Elegy on the Death of John Keats”, by Percy Bysshe Shelley.