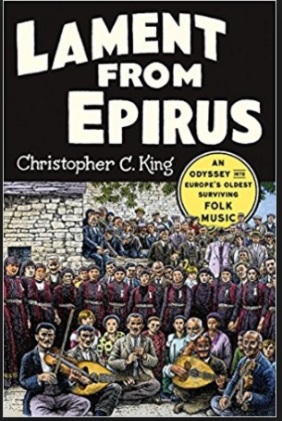 Some readers may be interested in this forthcoming book by Grammy-winning producer Christopher C King, about the oldest fold music tradition in Europe, music that Paddy almost certainly would have come across in his travels across northern Greece.

Described as being in the tradition of Patrick Leigh Fermor and Geoff Dyer, Christopher King discovers a powerful and ancient folk music tradition.

In a dark record shop in Istanbul, King uncovered some of the strangest and most hypnotic sounds he had ever heard. The 78s seemed to tap into a primal well of emotion inaccessible to contemporary music. The songs, King learned, were from Epirus, an area straddling southern Albania and northwestern Greece and boasting a folk tradition extending back to the pre-Homeric era. Lament from Epirus is an unforgettable journey into a musical obsession which follows a genre back to the roots of song itself. As King hunts for traces of two long-lost virtuosos, he tells the story of the Roma people who pioneered Epirotic folk music and whose descendants continue the tradition today. His journey becomes an investigation into song and dance’s role as a means of spiritual healing and what this may reveal about music’s original purpose.

The book is due for release in May and can be pre-ordered on Amazon. Lament from Epirus: An Odyssey Into Europe’s Oldest Surviving Folk Music