Towards the end of Between the Woods and the Water, Paddy is exploring the Danube which he described as wild, with ‘many scourges to contend with’ including the Kossovar winds which in the spring could ‘reach a speed of fifty or sixty miles an hour and turn the river into a convulsed inferno.’ A long, long, way from the tamed beast that the once great river is now.

In the midst of this occasional inferno lay an island with a Turkish name, Ada Kaleh, which means ‘island fortress’. Paddy tell us that he had read all that he could find about the island, and was very keen to explore this lagoon of Turkish descendants which was quite probably abandoned by the retreating Ottomans as their empire shrank. Although placed under control of the Austro-Hungarian Empire following the Berlin Conference in 1878, very little changed and it was ceded to Romania at Versailles. The Romanians too had better things to do with their time and left the inhabitants undisturbed.

It was into this cultural, religious, and demographic time capsule that Paddy stepped in August 1934 and immediately joined a group of men at a rustic coffee-shop, who were armed with ‘sickles and adzes and pruning knives’. Paddy describes the moment as if he had suddenly been ‘seated on a magic carpet.’ 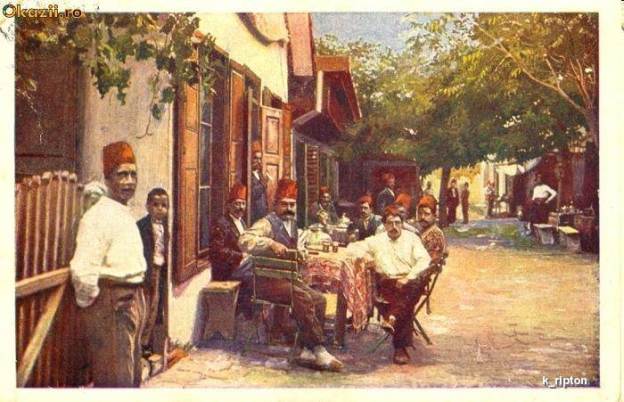 Ada Kaleh – “as if seated on a magic carpet”

Paddy spent a night on the island, and slept out by the Danube, under the stars, watching meteors, and listening to the sounds of owls and barking dogs, interrupted by the occasional sound of a cart wheel or the splash of a fish in the now calm and lazy river. He dreamt of crusaders under King Sigismund of Hungary attempting to turn back the Turkish tide in 1396. They crossed the river almost at this point, and what excited Paddy most was the thought that ‘the last pikeman or sutler had probably reached the southern bank this very evening, five hundred and thirty-eight years ago.’ Sigismund’s allied army of Hungarians, Wallachians, French, Germans and Burgundians, with a few Englishman, was shattered by Sultan Bayazid at the battle of Nicopolis further down the Danube, with the captured dying in ‘a shambles of beheading lasting from dawn to Vespers’.

Like the storks he saw the next day, who were preparing to fly off to “Afrik! Afrik!”, as an old Turkish man gestured, Paddy departed after breakfast to Orsova. Ever one for losing things he discovered that he had left behind an antler which he had been carrying as a trophy. Paddy writes that ‘perhaps some future palaeontologist might think that the island had once teemed with deer’.  This cannot be as the river was dammed and Ada Kaleh submerged by the rising Danube. Its population was evacuated and its mosque removed to a new, safe location. Such mitigation measures did not satisfy Paddy as he states in the Appendix to BTWW. The second of the two attached presentations is also a heartfelt, but belated cry of protest in Romanian.

Please take a look at these presentations. If you have PowerPoint you will find there is appropriate musical accompaniment (slide show one has a song called Ada Kaleh). The images show the place and its people almost exactly as Paddy would have seen it, something that we can truly say will be seen no more. The pdf copy is for those who do not have access to PowerPoint. I do hope that you enjoy them.

There are lots more great pictures to be found on Google images.

25 thoughts on “Ada Kaleh: the lost island of the Danube”