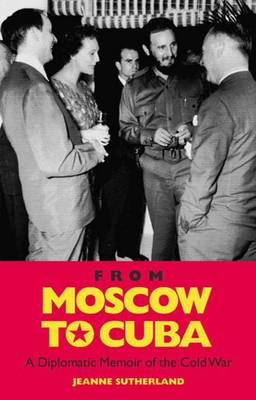 Jeanne Nutt and Iain Sutherland began their careers as professional diplomats in Moscow when Stalin was still alive. Although both had studied the language, literature and history they arrived in Moscow separately. Three decades later they would leave the city together, after three ageing leaders had died in a row and just as things were about to change for ever with Gorbachev’s perestroika.

By then, Jeanne’s career was long over. When she and Iain had married in 1955, she had been obliged, under rules not finally abolished until 1972, to resign. From then on her fate had been to pack and follow her husband wherever his career took him. She continued to take a lively and intelligent interest in the people and the politics of the places where she and her husband lived, and where they witnessed some of the turning points of the Cold War.

In her book From Moscow to Cuba and Beyond, A Diplomatic Memoir of the Cold War, she gave a flavour of the sometimes bizarre life diplomats led in those distant days.

The Sutherlands served in Cuba, Washington, Yugoslavia, Indonesia and Athens, where Iain was ambassador, and this is where they met Paddy. Her book focuses on their three tours of duty in Russia. The highlight of their first stint in Moscow was the death of Stalin in March 1953. That morning their maid arrived in their apartment shattered by grief. She made an inedible breakfast, broke down in tears, and fled. The old woman who guarded the front door was sobbing into her shawl. The following day the ambassador, the splendidly named Sir Alvary Gascoigne, went with his staff to pay their respects to Stalin as he lay in state in Moscow’s Hall of Columns. The ambassador insisted that all should wear top hats, wholly unsuitable headgear when the thermometer stood at -20C, and the diplomats were ushered past the coffin so fast that one of them missed Stalin altogether.

This account is taken from her diary of the events around the 40th Anniversary of the Battle of Crete.

Lord and Lady Caccia arrived to take part in the Crete activities, this being the 40th anniversary of the battle. The Olympic (airlines) strike threatened to leave us without transport to Chania so we were all – the Australian and New Zealand delegations, Paddy Leigh Fermor and ourselves – given seats in the Minister (Averoff’s) plane which took off from Tatoi about 6. We arrived about 7.30 in Chania and poured into the already crowded Porto Veneziano Hotel. There were obviously too many, even of the British Delegation, to have a quiet taverna dinner altogether so we collected our party and Paddy and Johnny Craxton and had a fish meal at the taverna near the hotel.

The ceremonies of the next few days seemed never-ending as we toiled round with over 100 veterans, three Ministers of Defence and Mitsotakis, Scottish pipers, Australian buglers and Greek military bands. It was tiring, interesting and at times particularly moving, as in Galetas which was in the centre of the battle, and Souda Bay where the Australians broke into singing God Save the Queen as the anthems were played.

The ceremony of the laying of the plaque dedicated to the members of the resistance in Crete who lost their lives, was delayed yet again and finally unveiled at 7.30 p.m. There were short speeches by Averoff and Iain and by Paddy Leigh Fermor at greater length after much agonising. (The story about the glass of water at the British Council lecture was true, he told me. When the attendant topped it up with more water it became cloudy and revealed to all that he was keeping up his courage with ouzo!)

The party set off from Heraklion for Mount Ida and the village of Anoya to meet Paddy Leigh Fermor’s resistance friends for a lunch in the mountains and to hear stories of how the men folk were shot and the village burned in reprisal for the acts of sabotage perpetrated by the SOE fighters. We collected the mayor and Dilys Powell in the Rolls and took it up the rough road to Psiloriti near the Cave of Zeus. Here the air was fresh and crisp, and together with the veterans of the underground resistance, we sipped raki and ate local cheese outside and then went inside for crisp hot lamb and more local wine; all this accompanied by playing of the lyre (lira) and singing by Paddy and his companions.

The climax was the ‘simple taverna party’ in the evening outside town for the veterans. It was given by Kefaloyannis, the large burly moustachioed Cretan (whom at the lunch I had taken to be a former shepherd and not a hotel owner), in his 600 bed hotel. Twenty or thirty of us were wined and dined, given champagne, serenaded by the hotel singers (more Filaden, Filaden), watched dancing and plate throwing and finally our host’s firing bullets through his hotel windows. Paddy told me the story of Kefaloyannis, who had abducted a young Cretan girl in the 1950s, the daughter of a Venizelos supporter and therefore a declared enemy, as K was a Royalist. When the island was on the brink of civil war over it he came down from the mountains, gave himself up and went to prison. Later they were married, but this did not last and he is now married to the sober black-dressed lady who was sitting on Iain’s right. Sitting opposite me was Paddy’s god-daughter whose father was shot, trying to escape from the village of Anoya, after sheltering Paddy several times during the war.

Extracted from Jeanne Sutherland’s diaries and her book, From Moscow to Cuba and Beyond, A Diplomatic Memoir of the Cold War. Published by The Radcliffe Press in 2010 (p 276-277).