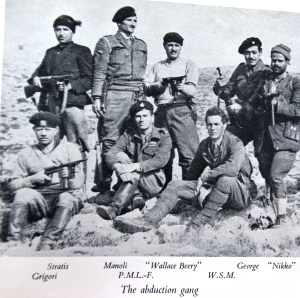 The abduction gang - PLF centre Moss to his left

This is a wonderful find brought to us by Blog reader Erik Bruns.

Many will remember the TV show This is Your Life. Greek television had their own version, and in 1972 it was Paddy’s turn to be embarrassed and surprised by meeting again people that he had come across in his life. His surprise and clear delight at meeting with the ‘Abduction Gang’ of Cretan Andartes is clear. The ‘senior’ partisans, Manoli and George (see picture left) are the first two guests, and they seem barely changed.

The highlight must be when the presenter introduces a slightly frail General Heinrich Kreipe. Paddy is delighted to see him again, and immediately starts to talk to the General in German saying how good it is to see him after all these years.

I am amused as one of the Cretans takes the General’s arm to help him sit down; maybe he did the same before on that road to the Villa Ariadne, but was perhaps a little less gentle on that occasion!

There follows what is one of television’s most wonderful scenes as Paddy acts as translator answering the presenter in Greek and then switching back to German to speak to the General.

Take fifteen minutes of your life to watch Paddy, and all these great men, as they share their experiences of an event which took place thirty years before, with great animation and clear joy.

I have a feeling that there was a pretty good party afterwards with plenty of Ouzo and Retsina!