Captain Henry Diacono, who has died aged 86, was a member of SOE and was dropped into enemy-occupied France in 1944. 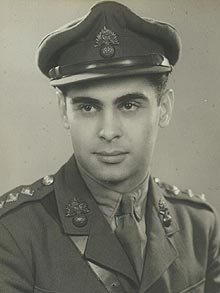 On February 6 that year, Diacono was dropped “blind” – that is to say, with no reception committee to meet him – into France, landing near Chartres. Accompanying him was René Dumont-Guillemet, who became leader of the “Spiritualist” circuit to the east of Paris.

They landed at 3am in a ploughed field some 15 miles from the farmhouse that was their destination. They had no time properly to hide their suitcases and parachutes, and after crossing fields, ditches and fences were still in the open when it grew light. A barn where they might have hidden up for the day had a sign on it in gothic lettering and they decided to avoid it. Then, as they passed a house in a small village, they heard the sound of a programme being broadcast in heavily-jammed English.

Dumont-Guillemet knocked on the door, while Diacono stood behind him, revolver drawn. After a few moments hesitation, they were allowed in. They washed and rested and were given directions for continuing their journey.

After a night in their “safe” house, they returned to collect their belongings but found, to their consternation, that they had disappeared. It seemed that their arrival had been spotted and that their arrest might be imminent.

At that moment a peasant appeared; and, after several minutes of verbal fencing, he told them that he had watched them hurriedly bury their possessions, had recovered them and put them in his house for safe-keeping.