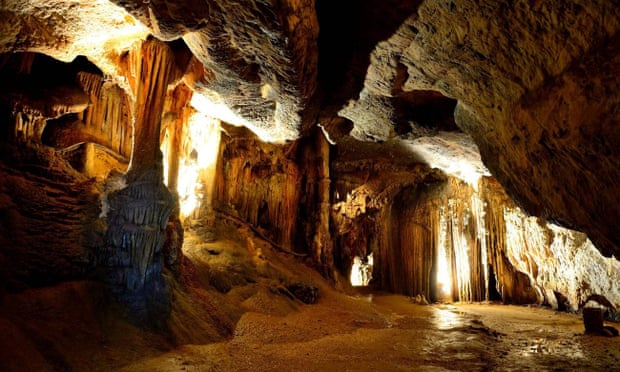 , is one that offers a new perspective on the human impact on our planet, is receiving rave reviews.

First published in The Guardian.

Stories of human journeys into the Underworld are as old as literature itself. But few of them are happy tales. Old Babylonian cuneiform tablets recording the Epic of Gilgamesh were first incised around 1800BC. These tell of the Sumerian hero Enkidu who reappeared from a long imprisonment underground in the Netherworld, during which he had to sail through storms of hailstones that struck him like “hammers”, and surfed waves that attacked his boat like “butting turtles”. Gilgamesh questions him: “Did you see my little stillborn children who never knew existence?” “I saw them,” answers Enkidu.

Similar journeys end as darkly for Orpheus, Hercules and Aeneas as they do for their direct counterparts in Finnish, Inuit, Aztec, Mayan and Hindu mythology. In Greek mythology tales of haunting journeys down the rivers of the dead are sufficiently common that they have their own collective noun: katabasis. But for every Theseus who enters the labyrinthine darkness of the Underland to triumph against the Minotaur there are many more Eurydices who never return. Such fears, Robert Macfarlane points out, are embedded deep in our language where “height is celebrated but depth is despised. To be ‘uplifted’ is preferable to being ‘depressed’ or ‘pulled down’.”

There is throughout a transcendent beauty to Macfarlane’s prose, and occasional moments of epiphany and even ecstasy – such as when, somewhere below Trieste, he abseils “into an immense rotunda of stone, cut by a buried river and filled with dunes of black sand”. Nevertheless, his journeys deep into the earth “far from the human realm”, are usually melancholic and claustrophobic, and are occasionally properly frightening.

Some of this comes from the danger and difficulty inherent in underground journeys. In a cave system in the Mendips, a rope thrown down as an escape route becomes entangled behind the belay boulder; only the necessity to regain the surface forces Macfarlane to risk his life climbing up it. Under Paris, he nearly becomes stuck in a narrow vertical shaft as “the stone that encases me, the stone that is measuring me up like a coffin, starts to vibrate … The thought of continuing is atrocious. The thought of reversing is even worse. Then the top of my head bumps against something soft … ”

As in his first book, Mountains of the Mind, Macfarlane remains obsessed by the fear and fascination generated in the human heart by extreme landscapes, and he clearly savours the adrenaline rush – what Al Alvarez calls, in his classic essay on climbing and fear, “feeding the rat”. “I have rarely felt as far from the human realm,” Macfarlane writes, “as when only 10 metres below it, held in the shining jaws of a limestone bedding plane first formed on the floor of a warm Cretaceous sea.”

When not getting stuck himself, he regales us with tales of some of those who never returned: in the Mendips we hear “a story that some people in the Peak District do not like to discuss, sixty years on”, of the caver Neil Moss who became wedged in a limestone shaft and, despite a countrywide rescue effort, suffocated before he could be hauled out; he was later “sealed by cement in the fissure that had killed him”. In Italy we are told of “the fallen angel of French speleology”, Marcel Loubens, who winches himself into an abyss only to have his belt clip snap. His injuries, “a broken spine and a fractured skull”, are so severe that he dies in the dark, 36 hours later.

But as always with Macfarlane’s books, the tales of adventures are only a takeoff point for discussions of deeper concerns: the relationship between man and landscape, the instability of time and place, and perhaps above all, the fragility of all we are and all we create. These are concerns that run like dark seams of glittering ore throughout his writing, across several successive books. In his early masterwork The Wild Places he wrote how “the wild prefaced us, and it will outlive us. Human cultures will pass, given time, of which there is sufficiency. The ivy will snake and unrig our flats and terraces, as it scattered the Roman villas. The sand will drift into our business parks, as it drifted into the brochs of the Iron Age. Our roads will lapse into the land.”

This idea is developed at much greater length in Underland: A Deep Time Journey

, as premonitions of our present apocalyptic Anthropocene close in around Macfarlane like the shades of Hades around the backward-looking Orpheus. For this book is also about man’s almost incidental place in the world when seen from the perspective of geological time. It is above all a journey into darkness, and the omens are not good. The climatic consequences of human actions are now, he believes, beyond our control. One hundred thousand years ago, three river systems ran across the Sahara. In around 5bn years “the Earth will fall dark when the sun exhausts its fuel”. 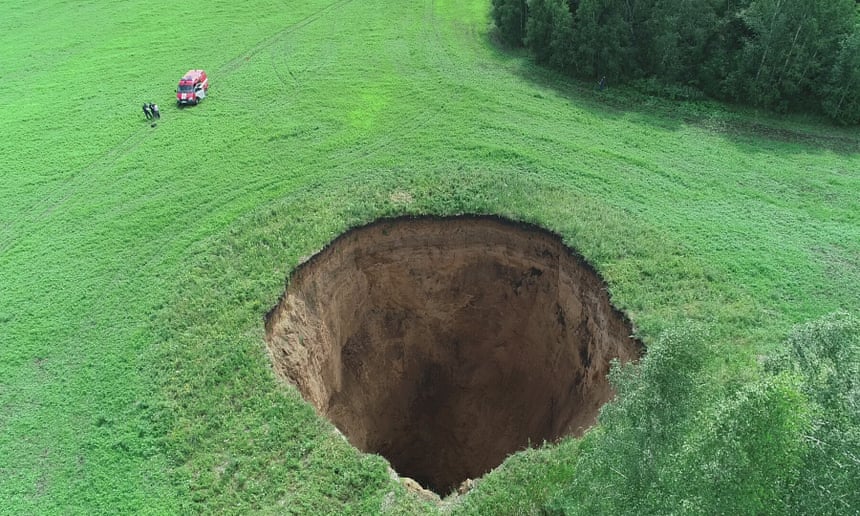 A 50m-deep sinkhole in the Nizhny Novgorod region of Russia. Photograph: Tass

In between these two markers, the signs of our own self-destruction are becoming ever more evident. Philip Larkin thought that what will survive of us is love. Macfarlane is more pessimistic. What will really succeed us, he fears is “plastic, swine bones and lead-207, the stable isotope at the end of the uranium-235 decay chain”. “What does human behaviour matter,” he asks, “when Homo sapiens will have disappeared from Earth in the blink of a geological eye? Viewed from the perspective of deserts or oceans, morality looks absurd, crushed to irrelevance. A flat ontology entices: all life is equally insignificant in the face of our eventual ruin.”

Early in the book we visit a laboratory under the Whitby coast where scientists study the traces of dark matter formed at the birth of the universe. Later we ascend from the forests of the Carboniferous period to the wastelands of the Anthropocene. The final sections concern Macfarlane’s visit to what is to supposed to be the most secure place on Earth – beneath Olkiluoto Island on the Bothnian sea off Finland, where nuclear waste will be buried until it becomes safe at the end of its half-life, millions of years from now. Here we catch a glimpse of our “nuclear futures of an Anthropocene-to-come” where “the timescale of the hazard is such that those responsible for entombing this waste must now face the question of how to communicate its danger to the distant future. This is a risk that will outlast not only the life of its makers but perhaps the species of its makers.” After this last quest is completed, the final pages of Underland record the author’s return home, where he takes his young son in his arms and holds him close, as if to protect him from the gathering shades he has learned to converse with and which he cannot now un-see. It is a moving end to a most unsettling quest.

is, as its title suggests, “a book about burial and unburial and deep time”, “the awful darkness inside the world”, “of descents made in search of knowledge”, to study the places where “we have long placed that which we fear and wish to lose, and that which we love and wish to save”. If fear is a constant companion on such journeys, for the reader at home there are many pleasures, most notably the armchair exploration of a far more benign landscape: the interior of Macfarlane’s magnificently well-furnished mind. For the darkly tangled path this book takes through the labyrinth of history and memory, literature and landscape, high-flown prose and underworldly observation are illuminated by Macfarlane’s inventive way with language. At its best, this has an epic, incantatory quality. There is a rare gift at work here: chiselled prose of such beauty that it can, on occasion, illuminate the darkness below ground as startlingly as a Verey light sent up into the vaults of one of Macfarlane’s subterranean stalactite cathedrals.

Like WG Sebald, another teacher of literature, Macfarlane brings the full weight of his erudition to the table. He quotes a dazzling range of poets and novelists and great galaxies of writers on geology, archaeology, mythology, morphology and glaciology, as well as on nuclear science, “dark matter” physics and art history. We swing from the thoughts of Rainer Maria Rilke on the Orpheus myth to the latest discoveries about “hyphae” – “the superfine threads fungi send out through the soil” – then move from learned opinions on Neanderthal rock art dating from around 65,000BC to Sir Thomas Browne (a particularly Sebaldian moment) to HG Wells, Jorge Luis Borges, Italo Calvino and Cormac McCarthy.

is, unquestionably, his magnum opus, a work that has taken him nearly 10 years to complete. Though darker than his earlier books, it is as rich as anything he has ever written, blessed with the scholarship of Sebald, the stylistic felicity of Bruce Chatwin and the vocabulary and syntax of Patrick Leigh Fermor. It contains the summation of his most important ideas.

Nearly 40 years ago, the critic Paul Fussell wrote that with The Road to Oxiana, Robert Byron had done for the travel book what James Joyce did for the novel with Ulysses. This is the flame that Macfarlane has now carried into a new century. With Underland he has written one of the most ambitious works of narrative non-fiction of our age, a new Road to Oxiana for the dwindling twilight of the Anthropocene.