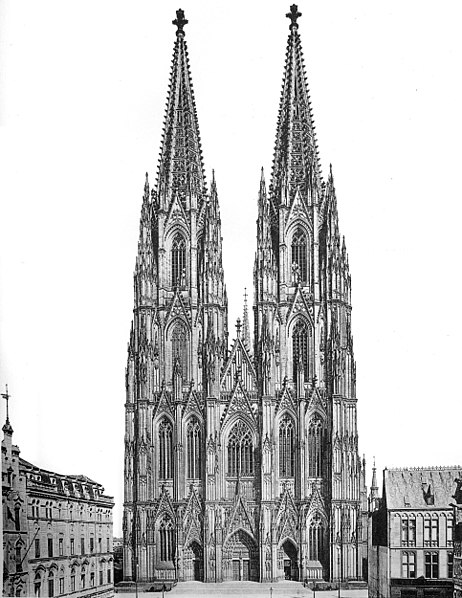 The west front of the completed Köln cathedral in 1911

A further extract from A Time of Gifts to mark the 85th anniversary of the “great trudge”.

After a first faraway glimpse, the two famous steeples grew taller and taller as the miles that separated us fell away. At last they commanded the cloudy plain as the spires of a cathedral should, vanishing when the outskirts of the city interposed themselves, and then, as I gazed at the crowding saints of the three Gothic doorways, sailing up into the evening again at close range. Beyond them indoors, although it was already too dark to see the colours of the glass, I knew I was inside the largest Gothic cathedral in Northern Europe. Except for the little constellation of tapers in the shadows of a side chapel, everything was dim. Women knelt interspersed with nuns and the murmured second half of the Gegrusset seist Du, Maria rose in answering chorus to the priest’s initial solo; a discreet clatter of beads kept tally of the accumu­lating prayers. In churches with open spires like Cologne, one could understand how congregations thought their orisons had a better start than prayers under a dome where the syllables might flutter round for hours. With steeples they follow the uprush of lancers and make an immediate break for it.

Tinsel and stars flashed in all the shops and banners saying Frohliche Weihnacht! were suspended across the streets. Clogged villagers and women in fleece-lined rubber boots slipped about the icy pavements with exclamatory greetings and small screams, spilling their armfuls of parcels. The snow heaped up wherever it could and the sharp air and the lights gave the town an authentic Christmas card feeling. It was the real thing at last! Christmas was only five days away. Renaissance doors pierced walls of ancient brick, upper storeys jutted in salients of carved timber and glass, triangles of crow-steps outlined the steep gables, and eagles and lions and swans swung from convoluted iron brackets along a maze of lanes. As each quarter struck, the saint-encrusted towers challenged each other through the snow and the rivalry of those heavy bells left the air shaking.

Beyond the Cathedral and directly beneath the flying ­buttresses of the apse, a street dropped sharply to the quays. Tramp steamers and tugs and barges and fair-sized ships lay at anchor under the spans of the bridges, and cafes and bars were raucous with music. I had been toying with the idea, if I could make the right friends, of cadging a lift on a barge and sailing upstream in style for a bit.

I made friends all right. It was impossible not to. The first place was a haunt of seamen and bargees shod in tall sea-boots rolled down to the knee, with felt linings and thick wooden soles. They were throwing schnapps down their throats at a brisk rate. Each swig was followed by a chaser of beer, and I started doing the same. The girls who drifted in and out were pretty but a rough lot and there was one bulky terror, bursting out of sailor’s jersey and wearing a bargeman’s cap aske on a nest of candy-floss hair, called Maggi – which was short for Magda – who greeted every newcomer with a cry of ‘Hallo, Bubi!’ and a sharp, cunningly twisted and very painful pinch on the cheek. I liked the place, especially after several schnapps, and I was soon firm friends with two beaming bargemen whose Low German speech, even sober, would have been blurred beyond the most expert linguist’s grasp. They were called Uli and Peter. ‘Don’t keep saying Sie,’ Uli insisted, with a troubled brow and an unsteadily admonishing forefinger: ‘Say Du.’

This advance from the plural to the greater intimacy of the singular was then celebrated by drinking Brüderschaft. Glasses in hand, with our right arms crooked through the other two with the complexity of the three Graces on a Parisian public fountain, we drank in unison. Then we reversed the process with our left arms, preparatory to ending with a triune embrace on both cheeks, a manoeuvre as elaborate as being knighted or invested with the Golden Fleece. The first half of the ceremony went without a hitch, but a loss of balance in the second, while our forearms were still interlocked, landed the three of us in the sawdust in a sottish heap. Later, in the fickle fashion of the very drunk, they lurched away into the night, leaving their newly-created brother dancing with a girl who had joined our unsteady group: my hobnail boots could do no more damage to her shiny dancing shoes, I thought, than the seaboots that were clumping all round us. She was very pretty except for two missing front teeth. They had been knocked out in a brawl the week before, she told me.

Extract from A Time of Gifts by Patrick Leigh Fermor, with thanks to John Murray Publishers