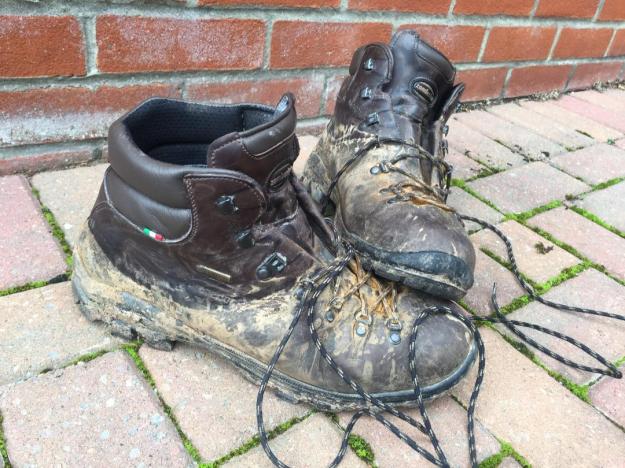 For those of us who walk, selecting good boots is probably the most difficult decision that we make. Whilst all other kit is binary – it either works or it doesn’t, like a stove or a waterproof – we never know about our boots until we have actually tried them in anger on an actual walk. Even then they may seem fine for the first few miles, or for a day walk. But how will they hold up to many days over varied terrain?

The choice is so very personal. Do we have wide feet, or balletically narrow? Are the toes on our right foot longer than those on the left? What about those seemingly large ankle bones that always rub? Of course we may also need to select boots for differing conditions such as the ability to take crampons.

I have struggled most of my life to find the right boots. The DMS boots issued to me in the Army were killers. The “improved’ version, the Combat High, was only marginally better. I had some fair success with a stout pair of Meindl boots which were much better suited to mountain walking than long trails. I used them on my 2013 walk to Santiago de Compostela, but I suffered various pains and blisters after a while. Eventually things settled, feet hardened and I wore them again (after a period in sandals and socks!!).

After the Camino, I searched for a replacement, seeking something lightweight and unsuccessfully tried some Scarpa boots which just didn’t size up correctly and caused problems after some miles, and another expensive pair of newer Meindl’s which again were not right and I gave them away.

Both my daughters successfully achieved Gold Duke of Edinburgh Awards and as they got older and their feet stopped growing I gave them each a pair of Zamberlan boots. My eldest still has hers. Ten or more years on and after many, many miles, they have never given her any reason to complain. I thought maybe I should try Zamberlan next, but they are difficult to find. Last year I invested in a pair of Zamberlan 309 New Trail Lite GTX Walking Boots from Uttings Outdoors which is where I had bought the boots for my daughters. Since then I have walked over 500 miles in them, often day after day, carrying weight, and have never suffered from any pain or blisters. My lifelong search is over! Having said that, selecting good socks is also very important, but don’t worry I shan’t be showing you pictures of mine.

I thought that I would share this with you, as many of you will be walkers, and may experience the same problems that I have had. These boots are Italian and are therefore made on a small last. I am normally a size UK 11-11.5 (with narrow-ish feet) but I bought a size “Euro 48 – UK 12.75”. Size charts (and conversion charts) vary enormously so in essence I bought a pair at least one full size larger than normal. They are made from one piece of leather which means no seams to rub you, and the Gore-Tex lining works very well keeping my feet dry. Zamberlan make many other styles of boots (and Uttings appear to have the best range in the UK), but for support, comfort, and confidence, I cannot recommend my boots too much. So, if you are thinking about buying a new pair of boots consider these. But remember, we are all different, and what works for one may not work for another.

It would be great if you could join the debate and comment, telling us about your boot experiences!

6 thoughts on “A word about boots”