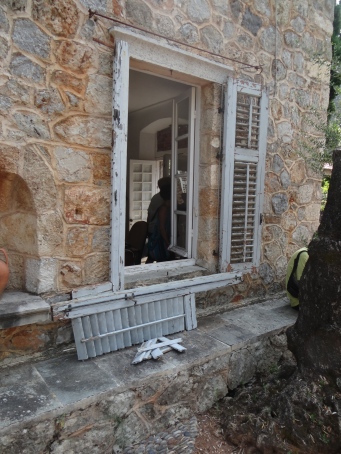 The July press release did state that commencement of repairs were dependant upon the issue of certain “licences” but nothing appears to have happened, and worse, the house faces yet another winter in a condition that one can only describe as dilapidated.

In August, Elizabeth and I visited the house which was being used by an Italian writer and his family as a summer retreat. The Benaki arranges tours. Naively I imagined that the tour, led by Elpida, would be for perhaps 4-6 people. In the end we had around thirty visitors milling around picking up what they liked whilst Elipda spent about half an hour writing out receipts by hand for the Euro 10 entrance fee. There was more concern about “take no photos” than for the house and its movable – or should I say, removable – property.

Dismayed was how I would describe our feelings when we found Patrick Leigh Fermor’s house in Kardamyli house in such a very poor condition. Window frames and shutters were rotting. Furniture was worn and torn, and getting worse by uncontrolled use. Most distressing of all, despite the Benaki’s statement that “artworks and valuable books have been transferred to the facilities of the Benaki Museum in Athens for conservation and safekeeping,” I found almost his entire library of first editions were available to pick up and read, mark with greasy hands, and who knows, perhaps pocket? Items that most of us would categorise as valuable, at least for their symbolism and sentimental value, such as medallions and small photographs of Paddy and Xan etc, were lying insecurely on shelves and mantelpieces. One would think that most people who visit would be respectful, but who knows, someone may be tempted to remove a few of these small items.

We have to hope that real progress will be made, but the events mentioned in the original press release, including a talk in London in November to update us all on progress have not occurred – your Blogger has heard of no plans. At this rate, by the time anything happens and work commences, the initial ten year period that the Benaki is required to implement Paddy’s wishes will have passed. My understanding of the bequest is that the cash-strapped museum will then be free to sell the property if it so chooses. We can each make up our own mind about what might happen then.

A selection of photographs that I was not supposed to take follow.