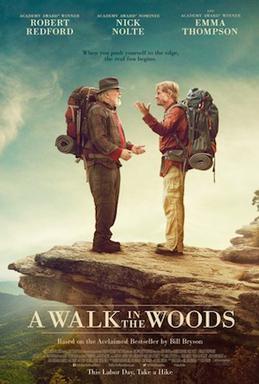 Whilst I find Bill Bryson amusing, his, possibly contrived, whimsey would probably get on my nerves if I read too much of him. I have never read A Walk in the Woods: Rediscovering America on the Appalachian Trail

, but I have sometimes thought how it must be to walk it. During my Camino to Santiago de Compostela I walked for some days with a guy who had done it three times; he was all at once a loner but at the same time he craved company. I guess that you really do have to be a loner to walk all 2,200 miles of the Appalachian Trail. I thought that you might find this article interesting, and it may whet your appetite for watching the movie of the book (walking movies are all the rage) which stars Robert Redford and Nick Nolte, due for release 2 September.

When I was eighteen, I bought a copy of Bill Bryson’s A Walk in the Woods: Rediscovering America on the Appalachian Trail

which remains, if my conversations with strangers are any indication, the only book anyone has ever read about the Appalachian Trail. It was summer. My friend Andy and I had driven across the country and ended up in the town of Sheridan, Wyoming, where we stayed for a week with a genial middle-aged couple, family friends of my friend. Scanning my hosts’ bookshelves, as I have a tendency to do, I was quietly horrified to discover that they were exclusively stocked with works of pop evangelicalism (Rick Warren and the like). It was a literary desert: xeric, Mosaic. Bryson’s book was the only one I’d brought, so, while Andy rode dirt bikes with a guy named Dusty, I lay on a fold-out couch in the basement, consuming it in controlled bursts, as if bolting food rations.

I had dreamed of hiking the Appalachian Trail since I was ten years old. From Bryson’s wry, well-researched account, I began to learn how it would feel to walk through two thousand miles of mountainous wilderness. What stood out most were the descriptions of “tranquil tedium,” a seemingly endless trudge through the “cubic” vastness of deep woods. “At times,” he writes, “you become almost certain that you slabbed this hillside three days ago, crossed this stream yesterday, clambered over this fallen tree at least twice today already. But most of the time you don’t think. No point. Instead, you exist in a kind of mobile Zen mode, your brain like a balloon tethered with string, accompanying but not actually part of the body below. Walking for hours and miles becomes as automatic, as unremarkable, as breathing.”

Around page one hundred, I reached the passage where Bryson and his hiking partner study a wall-map of the trail in an outdoors store, in Gatlinburg, and, overcome by the sight of how little of it they had already walked, decide to skip the state of North Carolina and drive to Virginia. I let out a howl of indignation and threw the book against the wall. But, needing to know how the book ended, I picked it back up again. I repeated the cycle (howl, throw, retrieve) when Bryson decided to skip the northern portion of Virginia and just drive up the trail, taking hikes here and there, and again when he quit a quarter of the way through the Hundred-Mile Wilderness, at which point he concludes, defiantly, “I don’t care what anybody says. We hiked the Appalachian Trail.”

There, in that basement, I resolved that one day I would hike the trail the right way: from end to end, in one continuous trip—what’s often called a “thru-hike,” always with that peculiar, abridged spelling, otherwise reserved for fast-food signage and nineteenth-century poetry.

I eventually did so, in 2009. It was roughly how Bryson described it: long, hard, and monotonous, but also beautiful and enlightening and wonderfully (and then, later, worryingly) slimming. While hiking the trail, I learned that whenever a thru-hiker met a day-hiker (as thru-hikers somewhat dismissively refer to those who are “just out for the day”), the day-hiker would invariably ask the same question: “Have you read ‘A Walk in the Woods’?”

Many thru-hikers bristle at this question. By quitting in Gatlinburg and then hop-skipping up the trail, Bryson bastardized the central conceit of a thru-hike, which is that you hike through—through mountains and valleys, through farms and small towns, through pain, through hunger, through nagging doubt. For thru-hikers, the continuity is the point, in the same way that running a marathon is more meaningful than running four separate 6.5-mile races. Certain thru-hikers, referred to as “purists,” take this emphasis on continuity to obsessive lengths. Some touch or kiss every blaze of white paint along the trail, while others carefully line up their shoes, like Japanese slippers, in the precise spot they entered a lean-to, so as to know exactly where to resume hiking the next day.

Bryson thus finds himself in the curious position of being both the outward face of the Appalachian Trail and its most inwardly mocked figure. This discrepancy will likely intensify when the film version of the book, starring Robert Redford and Nick Nolte, premières on September 2nd. I gather that some people who have thru-hiked the Pacific Crest Trail feel similarly about “Wild,” Cheryl Strayed’s best-selling hiking-memoir-turned-feature-film about hiking one third of the P.C.T. There is also the curious case of Paulo Coelho, the author of, among other books, “The Pilgrimage,” a best-selling account of walking the Camino de Santiago de Compostela, the famed network of pilgrimage routes across Spain (and beyond). Coelho quit in the town of O Cebreiro, some hundred miles short of his destination, and then rode in a bus to Santiago de Compostela. According to a profile of Coelho published in this magazine in 2007, the proprietor of a hotel along the Camino told Coelho that his book had done wonders for his business. “As Hemingway was for San Fermín, you are for the pilgrimage!” he exclaimed.

The question arises: why are the three most famous accounts of hiking three of the world’s most famous long-distance trails written by people who did not hike the whole distance?

One obvious answer: great writers are simply less athletic than your average human. But this theory crumbles upon closer inspection. John Muir walked a thousand miles, from Kentucky to the Gulf of Mexico, while Vachel Lindsay walked from Illinois to New Mexico, Matsuo Bashō walked the length of Honshu and back, Rory Stewart walked across the mountains of South Asia, Robyn Davidson walked across Australia, and Patrick Leigh Fermor walked across Europe.

In fact, I would argue that the loneliness and skull-bound nature of a long-distance hike fits quite nicely with the thinking out, if not the actual writing, of books. The dusty back aisles of Amazon are glutted with first-person accounts of successful thru-hikes, most of which tend to be buffed-up re-writes of the author’s trail journal. These books have a limited audience (namely, other thru-hikers), whereas the books that become best-sellers speak to people who would never embark on a long-distance hike in the first place. “A book about hiking the Appalachian Trail? Spare me. I could imagine it: We walked. We saw trees. We went up. We went down,” snarked a 1998 article in the New York Times, before praising the many charms of Bryson’s book.

The rare best-sellers leap this pitfall by hitching onto other well-established genres: Bryson’s is a humorous travelogue, Strayed’s a memoir about healing, and Coelho’s a quest novel. They also avoid the doldrums of strict, day-by-day linear storytelling. Instead, Bryson chunks his trip into discrete regions, drilling down into the history of each; Strayed pares the story back to a string of anecdotes, and then interweaves them with flashbacks from her rocky upbringing; and Coelho structures the walk around a series of spiritual “exercises”—battle a dog, climb a waterfall, raise a cross—assigned by his guide, Petrus. The reader is never tempted to skip ahead to see if the author finished the trek or not, because that has ceased to be the point.

Finally, all three narrators share the nervous, wide-eyed enthusiasm of a greenhorn. Reading the list of extraneous items that Bryson and Strayed packed for their thru-hikes—folding cutlery, a plastic dish, a spare gas bottle, four bandannas, a “big knife for killing bears and hillbillies”; a towel, binoculars, a foldable saw, a stainless-steel digging trowel, a metal votive-candle lantern, shampoo, conditioner, a hairbrush—made this minimalist’s teeth grind. But I imagine that a non-hiker might read that same list and think, “Oh wow, is that all? For four months?” Because they began in places of utter ineptitude and painfully ascended to the status of hardened veterans, Strayed, Bryson, and Coelho were able to fashion engaging emotional trajectories for their books. But that same lack of preparation and training made it exceedingly difficult for them to finish the trail, so they were ultimately forced to trim back their ambitions.

It has been twelve years since I last read A Walk in the Woods: Rediscovering America on the Appalachian Trail

I picked it up once following my thru-hike, but I found I was too close to the material; I quibbled over every description, guffawed over every misstep. Recently, while working on my own book about trails, I picked up my old copy again. Reading it as a writer, rather than a hiker, it felt fresh. In a voice at turns erudite, acid, and tender, it somehow manages to provide a brisk overview of both the long history and the vast expanse of the trail. Bryson captures the alienating shift in perception that attends a return to civilization from an extended stay in the wilderness, and uses that weird lens to inspect the more grotesque aspects of American society. He manages to sound the depths of a lifelong friendship without becoming maudlin. And he ultimately succeeds in claiming a personal victory from an otherwise botched expedition. In the book’s concluding pages, he catalogues all he gained from his hike: “For a brief, proud period I was slender and fit. I gained a profound respect for the wilderness and nature and the benign dark power of woods. I understand now, in a way I never did before, the colossal scale of the world. I found patience and fortitude that I didn’t know I had. I discovered an America that millions of people scarcely know exists. I made a friend. I came home.”

In the end, as at the beginning, I found “A Walk in the Woods: Rediscovering America on the Appalachian Trail

to be a delightful little book. Still, I don’t care what anybody, including the author, says: Bill Bryson did not hike the Appalachian Trail.

Buy A Walk in the Woods: Rediscovering America on the Appalachian Trail