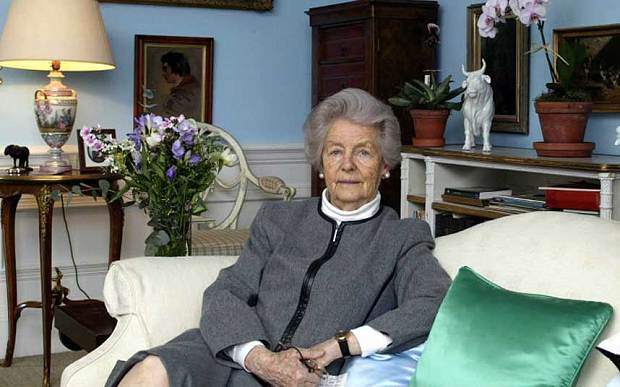 The Duchess at Chatsworth in 2005 Photo: REX

The Dowager Duchess of Devonshire was the devoted chataleine of Chatsworth and the last of the Mitford sisters.

First published in the Telegraph 24 September 2014

The Dowager Duchess of Devonshire, who has died aged 94, was the youngest and last of the celebrated Mitford sisters, and the chatelaine of Chatsworth, the “Palace of the Peak” in Derbyshire, which from the 1950s onwards she made into both a glorious public spectacle and, really for the first time, a consummately stylish private home.

She was born Deborah Vivien Freeman-Mitford on March 31 1920, the sixth daughter of the eccentric 2nd Lord Redesdale, well-known to readers of Nancy Mitford’s novels as “Uncle Matthew”. “Debo” (as she was always known) was repeatedly assured throughout her childhood by her eldest sister Nancy that “everybody cried when you were born” on account of her being yet another girl.

Debo took refuge in quaintly odd pursuits. Another sister, Jessica (“Decca”) Mitford, described her spending “silent hours in the chicken house learning to do an exact imitation of the look of pained concentration that comes over a hen’s face when it is laying an egg, and each morning she methodically checked over and listed in a notebook the stillbirths reported in the vital statistics columns of The Times”.

As the youngest in a family of seven, Debo was constantly and mercilessly teased, despite the bellowing championship of her father. She was passionately fond of the country and country pursuits, and did not suffer from the brilliant, restless boredom so well-documented by her sisters. None of the girls was sent to school, as their father thought education for girls unnecessary; a succession of governesses was employed, one of whom, Miss Pratt, had her charges playing Racing Demon daily from 9am until lunchtime.

As a girl Debo was a fine skater, and was invited to join the British junior team; but the idea was vetoed by her mother. As an adolescent she witnessed several scandals surrounding her sisters — Diana’s divorce and remarriage, Jessica’s elopement, Unity’s involvement with Hitler — as well as the disintegration of her parents’ marriage.

She was famous for having chanted as a child, in moments of distress: “One day he’ll come along, the Duke I love.” When she married Lord Andrew Cavendish in 1941, however, he was a mere second son. Debo wrote to her sister, Diana Mosley, then in Holloway prison: “I expect we shall be terrificly [sic] poor but think how nice to have as many dear dogs and things as one likes without anyone to say they must get off the furniture.”

Debo remained surrounded by dogs for the rest of her life. In The House: A Portrait of Chatsworth (1982), the delightful and bestselling book she wrote, in between doing a lot of sums to illustrate that 365 ordinary-sized residences could fit into The House, with its 7,873 panes of glass and 53 lavatories, the Duchess took care to inform the reader: “It’s a terrible place to house-train a puppy.”

In 1944 Andrew’s elder brother was killed in action, and in 1950 the 10th Duke unexpectedly died. The Devonshires were left with 80 per cent death duties which took 17 years to settle. In 1959 they moved to Chatsworth, uninhabited since before the war.

When she had first seen the house after the war she had thought it “sad, dark, cold and dirty. It wasn’t like a house at all, but more like a barracks.” It had not been redecorated for decades, and during the war had been home to a girls’ boarding school.

But Debo embraced her role of chatelaine gaily, as she set about redecorating the house. “Debo has become the sort of English duchess who doesn’t feel the cold,” reported Nancy, disconsolately.

The Duchess was both beautiful and deceptively literate, although exceptionally modest. Lucian Freud painted her when she was 34, and Debo used to delight in the story of how an old woman was heard remarking, as she stood before the painting: “That’s the Dowager Duchess. It was taken the year before she died.” When the painting was completed, Freud allowed the Duke and Duchess to see it at his studio. “Someone else was already there,” she later recalled. “Andrew looked long at the picture until the other man asked, ‘Who is that?’ ‘It’s my wife.’ ‘Well, thank God it’s not mine’.”

She also sat for Annigoni, to whom she found herself apologising for her face: “I know it’s not the sort you like.” The artist replied, not very graciously: “Oh well, it doesn’t matter, it’s not your fault.”

The Duchess kept aloof from her family’s literary and political pursuits. She visited her Fascist sister Diana in prison, and her Communist sister Decca in California, keeping a light touch with both.

After visiting Decca and doing the rounds of her Communist friends, Debo sent Decca a photograph of herself and her husband, dressed in their ducal robes for a coronation, garlanded with orders, chains and jewels, staring stonily ahead. Beneath the photo she wrote: “Andrew and me being active.”

Nancy used to address letters to her sister “Nine, Duchess of Devonshire”, her contention being that Debo never developed beyond the mental age of nine. Certainly the Duchess always maintained that she never read books and that her favourite reading matter was the British goatkeepers’ monthly journal, Fancy Fowl magazine and Beatrix Potter.

The epigraph in her book The House is taken from Hobbes, who was tutor to the 2nd and 3rd Dukes of Devonshire: “Reading is a pernicious habit. It destroys all originality of sentiment.” 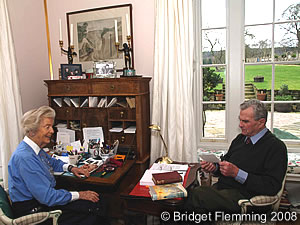 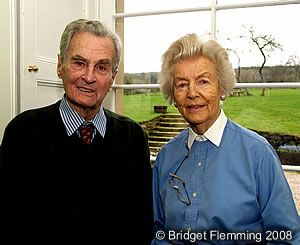 Chatsworth, however, was always filled with literati, and Patrick Leigh Fermor, a great friend, was determined that Debo was a closet reader, who sneaked books the way alcoholics sneak whisky. As a writer, she was a natural storyteller with a knack for the telling phrase and a delight in human eccentricities.

Certainly The House is a wonderfully rich and beautifully written work. It is organised around a Handbook of Chatsworth written in 1844 in the form of a letter from the “Bachelor Duke” (the 6th) to his sister and is full of very funny accounts of the foibles of earlier dukes and duchesses. Among other stories, it chronicles the war waged against woodworm by the wife of the 9th Duke (the former Lady Evelyn Fitzmaurice). Believing concussion to be the answer, the formidable beldame kept a little hammer in her bag to bang the furniture where they lurked.

The Duchess showed acute commercial flair in raising money for the Chatsworth estate, making a nonsense of her sister Nancy’s generalisation in Noblesse Oblige that aristocrats are no good at making money. She presided over the bread, cake, jam and chutney industries which grew up to feed the farm shop, which was described by the late Hugh Massingberd in The Daily Telegraph as “every greedy child’s idea of what a shop should be”.

Although the house had been open to the public ever since it was built, it was not until 1947 that the revenue from visitors went towards its upkeep. In 1973 the Duchess set up the Farmyard at Chatsworth, “to explain to the children that food is produced by farmers who also look after the land and that the two functions are inextricably mixed”. A little boy from Sheffield watched the milking, then told the Duchess: “It’s the most disgusting thing I’ve ever seen in my life. I’ll never drink milk again.”

Visitors to Chatsworth are able to buy items such as souvenirs, books, porcelain, knitwear, while the Farm Shop sells estate produce. A mail order business was established, along with cafés, restaurants and a commercial catering business.

Chatsworth Carpenters was an especially successful venture. The Duchess, in her gardener’s apron, was for many years a familiar sight at the Chelsea Flower Show, where she was to be seen busily selling furniture fit for a stately home to the owners of small town gardens.

The 11th Duke once observed: “My wife is far more important to Chatsworth than I am.” He added: “She is on the bossy side, of course; but I’ve always liked that in a woman.” She dealt heroically with her husband’s philandering nature and his weakness for alcohol, and the marriage was a happy one.

Despite living in a house overflowing with masterpieces by such artists as Rembrandt, Veronese, Murillo, Poussin and Reynolds, the Duchess always maintained that Beatrix Potter was her favourite artist, and Miss Potter’s enchanted world may indeed be the key to appreciating the genius loci of Chatsworth.

The Duchess was an ardent conservationist of vernacular architecture and was president of the Derbyshire Historic Buildings Trust. She also chaired the Tarmac Construction Group and the Rare Breeds Survival Trust.

Her devotion to making Chatsworth a viable financial concern was well rewarded in 1981 when a charitable trust, capitalised by the sale of certain treasures, was established to preserve The House for posterity.

In 2001 the Duchess published Counting My Chickens… and other home thoughts, a collection of sharply observed musings on Chatsworth, gardening, poultry, dry stone walling, bottled water, the United States, Ireland, the Today programme, the Turner Prize and other topics. On the modern fashion for hiring business consultants, she wryly observed: “He arrives from London, first class on the train… Most probably he has never been this far north, so the geography and the ways of the locals have to be explained, all taking his valuable time. After a suitable pause of a few weeks (he is very busy being consulted) a beautiful book arrives, telling you what you spent the day telling him.”

After her husband’s death in 2004 she published a poignant tribute in Memories of Andrew Devonshire (2007). Other publications included In Tearing Haste: Letters between Deborah Devonshire and Patrick Leigh Fermor (2008); Home to Roost … and Other Peckings (2009), a collection of occasional writings; and Wait for Me!… Memoirs of the Youngest Mitford Sister (2010). She was also a contributor to The Spectator and The Daily Telegraph. Her last book, All in One Basket, which brought together two earlier volumes of occasional writings, was published in 2011.

Her dislikes included magpies; women who want to join men’s clubs; hotel coat-hangers; and drivers who slow down to go over cattle grids. She regretted the passing of brogues, the custom of mourning, telegrams, the 1662 Prayer Book, pinafores for little boys and Elvis Presley (“the greatest entertainer ever to walk on a stage”).

In 2003 she published The Chatsworth Cookery Book, introducing it with the words: “I haven’t cooked since the war.”

Debo Devonshire was appointed DCVO in 1999.

She is survived by her son Stoker, the 12th Duke of Devonshire, and by two daughters.

Listen to the 2010 BBC Radio 4 interview on Woman’s Hour here.

The Duchess of Devonshire talks about Patrick Leigh Fermor

Our archive of articles about or including Debo