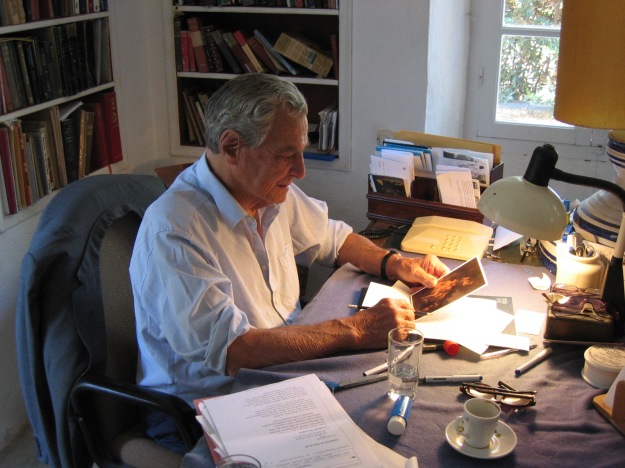 I was alerted to this article when its author, Sean Deany, posted some very nice comments on the blog. Thinking that this was one to share (there are some lovely pictures) I asked Sean if I could post on the blog. He very kindly said yes. Sean tells me he is off on a 1,700 km walk from Arles to Santiago de Compostela in 6 weeks time; so if you see an Aussie pilgrim reading A Time of Gifts wish him g’day.

In early 2001 restless and tired of my uneventful life I had the ambition to take a long walk and think things over. Hearing my complaints a good friend suggested to me that I should read Patrick Leigh Fermor’s two books “A Time of Gifts” and “Between the Woods and the Water”. Who? Was my reply. A bit surprised of my ignorance, he later supplied me with a tattered copy of the first book which would become a huge inspiration behind my travel ambitions. A few weeks later I discovered a near new copy of the second in the series of a planned trilogy. Then I had a great idea! I would write to Penguin Australia and naively ask them to forward my hand written letter to the author seeking his advice for my proposed walking tour across Europe.

This could have been the end to the matter. However and quite unexpectedly some weeks later a tiny envelope from Greece arrived into my post box. Inside it contained a two page hand scrawled response to my request  from the author himself Patrick Leigh Fermor. Common sense explained that I should not merely follow the same route he had taken all those years ago, since the world had changed to that of his youth when in hob nail boots he tramped across 1930s Europe. There and then he was really heading into the unknown! Instead he advised I should nonetheless traverse Europe, but perhaps begin in Portugal, Spain or France and head towards Eastern Europe by way of Poland and the Baltic States, before entering into Russia. From there I should swing down into the Crimea before plunging into the Caucasus. From there I could logically enter Turkey via Trebizond, following Xenophon’s Anabasis in reverse – all Greek to me –  before heading westwards to along the Turkish coastline! These were places he had always wanted to travel to, but now time was catching up on him and he doubted it would be possible. My head was by this time spinning in excitement with conflicting ideas into where and indeed when I should go.

3 thoughts on “An Encounter with Patrick Leigh Fermor”