Rake’s progress: Leigh Fermor set out from his rooms in Shepherd Market for Constantinople in 1933

And we’re off. This is the Patrick Leigh Fermor Tribute Walk, a bit of a Magical Mayfair Mystery Tour or even, as I prefer, a Paddy Pilgrimage: a literary procession in honour of the late warrior-writer through the London he knew during the course of an enviably long and dazzlingly adventurous life.

We have gathered at Heywood Hill, the venerable Curzon Street bookshop where Paddy, as he was always known to friends and fans, had an account for decades. The pilgrims are a caravan of travel writers and publishers, friends, acolytes, devotees and disciples, for such is the admiration—shading into unadulterated hero worship in some quarters—for a man considered one of the great prose stylists of the 20th century. Our group includes the travel writers Colin Thubron, Sara Wheeler, Anthony Sattin, Jason Elliot and Robert Macfarlane, the writers and historians Jason Goodwin and Fergus Fleming, publishers Roland Philipps and Barnaby Rogerson (in a tangerine linen suit), Mark Amory of the Spectator, an exuberant throng expertly marshalled by Paddy’s biographer Artemis Cooper.

It is not surprising that a man who wrote like an angel, fought like a knight and had beautiful women swooning at his feet for most of his adult life should attract such a following and such affection. Few men can claim to have walked across a continent, fallen in love with a princess, kidnapped a German general, joined a Greek cavalry charge and written a string of masterpieces.

“Patrick Leigh Fermor, the man, could have sprung from the pages of Cervantes or Homer, and we revere him at Heywood Hill for his courage, style and beautiful manners,” says Nicky Dunne, chairman of the bookshop, who dreamt up this expedition.

Paddy lived above the shop briefly in 1947 with Joan, his future wife. In 1965, horrified to have discovered how Communism had destroyed so many of his friends in the Europe he had walked across in 1933-34—”disaster overtook them all”—he set up an account at Heywood Hill for the great love of his youth, the Byzantine princess and artist Balasha Cantacuzene. “He couldn’t do much but he could make sure that at least she was never without good books,” says Cooper.

Our unruly, traffic-blocking gaggle spills out onto Curzon Street to the astonishment of passers-by—30 men and women sporting bright blue earpieces is a curious sight—and ducks into Shepherd Market to our next stop, 28 Market Street: four square windows above the “PLUS NEWS” newsagent. Having been kicked out of almost every school he had attended, Paddy washed up here as a restless 18-year-old with literary longings and a diminutive allowance. His long-suffering landlady, assaulted by endless revelry, was Miss Beatrice Stewart, an artist’s model who had sat for Sargent and Augustus John and was later immortalised in bronze as the Angel of Peace in Adrian Jones’s Quadriga of War on the Wellington Arch at Hyde Park Corner. “I can never pass the top of Constitution Hill without thinking of her and gazing up at the winged and wreath-bearing goddess sailing across the sky,” Paddy wrote in a typical flight of fancy.

“This is where the great walk began,” Cooper explains. “He’s lurching between high spirits and utter despair, filled with self-loathing, going to endless parties, ‘drowning hangovers like kittens’. His father wants him to get a job but Paddy thinks a career is life imprisonment. He’s uninstitutionalisable. All he wants to do is write.”

Hightailing it out of this Rake’s Progress, Paddy walked from the Hook of Holland through Nazi Germany to Constantinople. It took him over a year from 1933-34, much of it spent “in a coma of happiness” recounted decades later in the spellbinding prose of A Time of Gifts (1977) and Between the Woods and the Water (1986). Our little saunter is less than a mile in more than an hour. Yet what we may lack in schloss-hopping mileage and accumulated time, we make up for in rowdiness and delight. This could be a lesser-known ecclesiastical ritual of the Eastern Church, the Adoration of the Paddy. And we all know it will end, as it should, with wine.

We head towards Berkeley Square on roads slick with rain. “Paddy was my earliest model of a travel writer: brave, curious, cultivated and a marvellously gifted stylist,” says Thubron, president of the Royal Society of Literature. “It’s strange to be walking commemoratively through a world that’s not usually associated with him—not the Greece or Eastern Europe which all his readers know, but the London—still pouring rain—from which he set out 80 years ago.” 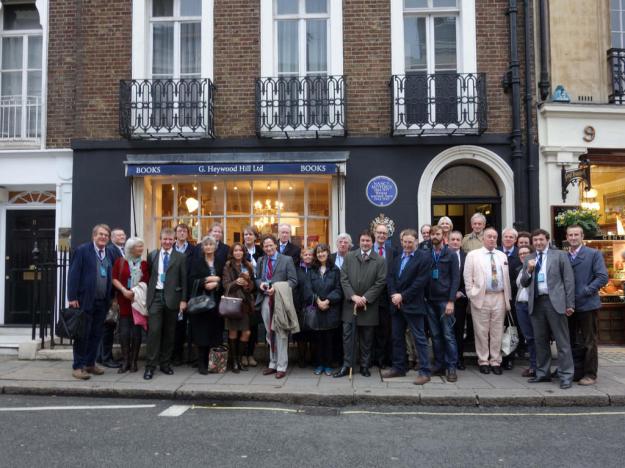 Here we are a stone’s throw from The Running Horse pub on Davies Street, from where Paddy briefly and rather successfully sold silk stockings as an impecunious teenager. Invited to share his tips with his fellow salesmen one evening, he popped a stocking onto his hand and described its properties as though it were a condom. He was fired on the spot. “That was the last sales job he ever had,” says Cooper. One night in the summer of 1940, when the London skyline was thick with smoke and flames, Paddy entered Berkeley Square from Piccadilly. “The blaze of an explosion had revealed two sides of that sentimental quadrangle in a disordered wreckage of wood and stone,” he wrote. “Only one thing remained standing. Perched three stories high on a tottering pinnacle of rubble was a white marble privy, glowing shyly in this unaccustomed radiance.”

We beetle along to Lansdowne Row, where Cooper describes a literary catastrophe on neighbouring Stratton Street, once home to the Baroness d’Erlanger, a rich and eccentric artist: “I think she had a bit of a crush on him.” Everyone did. In 1937 or 1938, Paddy left two trunks here full of papers connected with his trans-Europe tramp—every letter, diary and early draft. The Baroness moved home, put Paddy’s trunks into storage at the Harrods Depository, only for Harrods to sell them off years later because Paddy had forgotten to pay the storage charge. He had lost everything. There is a collective writerly wince. “Paddy said the pain used to ache ‘like an old wound in wet weather’, but I think it was the best thing that ever happened to him,” says Cooper. “It sort of set him free, allowing him to remember with advantage.”

To 50 Albemarle Street, former HQ for John Murray publishers, a powerhouse of British writers from Byron, Darwin and Disraeli to Walter Scott, Conan Doyle and Paddy. “Jock Murray was the best publisher and editor Paddy could have hoped for,” says Cooper. “In the days before agents he was also Paddy’s banker, therapist, PR consultant, book-finder and poste restante.”

Picking up the pace now like horses heading home—drinks at the Travellers Club await—we stride magnificently down Jermyn Street. One imagines Paddy, sartorially something of a peacock, thoroughly at home here.

“Oh God, absolutely!” Cooper says, laughing. “Hats from Lock, shoes from Lobb, Savile Row suits. He loved all these shops. Paddy adored clothes. In all his books the costumes of men and women are described in extraordinary detail. I’ve walked along Jermyn Street with him, striding along with his cane with that lovely flick upwards before putting it down. If you didn’t know, you’d think he’d never left the Home Counties.”

Into the final furlong and past the Cavendish Hotel, an unlovely blend of underground car-park and drive-through fast-food forecourt. “Here he met the tail end of the Bright Young Things, a decade after all those parties that had scandalised society.” Alistair Graham, Jennifer Fry, Eddie Gathorne-Hardy, Mark Ogilvie-Grant . . . and Elizabeth Pelly, to whom Paddy lost his virginity.

“They’re a revelation to him. Godlike and irresistible. Suddenly he feels he’s met kindred spirits.” He didn’t meet Evelyn Waugh at the Cavendish because Waugh was banned. Mrs Rosa Lewis, the owner, did not find her portrayal as Mrs Crump in Vile Bodies amusing. “If I get my ‘ands on that Mr Woo-agh,” she told Paddy, “I’ll cut ‘is winkle orff!”

Through St James’s Square and we’re almost trotting into Pall Mall, from where it is a hop, skip and jump up the 11 steps into the Travellers Club, whose bar Paddy did more than most to prop up—together with those of White’s, Pratt’s, the Beefsteak and the Special Forces Club—during 66 years as a member. In 1950, the Club Secretary reported to the House Committee that the nomadically careless Paddy owed “over £100 for storage, if by-law 6 were to be strictly enforced”.

There is an inescapable whiff of glamour and adventure at the launch party. A light sprinkling of aristocracy, a smattering of bohemian scruff, the sparkle of beautiful women, sumptuously suited grandees, suggestions of espionage, the straight-backed swagger of military top brass.

Paddy was a prodigious drinker. He once wrote of retsina: “One of its secrets is drinking it with unstinted abundance. It seems to have an alliance with the air in the promotion of well-being. Many people think that it bestows the gift of bodily health as well; a belief I accept at once without further scrutiny.”

The evening dissolves into high spirits, laughter and torrents of wine. The hommage is complete.

Marathon man – Justin Marozzi interviews Paddy and drinks quite a lot of retsina.

6 thoughts on “A Pilgrimage Through Paddy’s London”