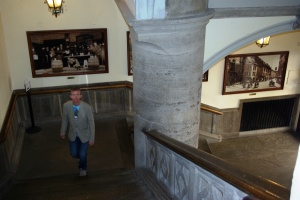 On the same steps as Paddy

“In the heart of them stood a massive building; my objective, the Hofbräuhaus. A heavy arched door was pouring a raucous and lurching party of Brownshirts onto the trampled snow.

I was back in beer territory. Halfway up the vaulted stairs a groaning Brownshirt, propped against the wall on a swastika’d arm, was unloosing, in a stanchless gush down the steps, the intake of hours. Love’s labour lost.”

Those of you well versed in Paddy’s writing will by now have realised that the above is not my own feeble prose but an excerpt from the passage in A Time of Gifts when Paddy enters Munich’s Hofbräuhaus on a cold January evening in 1934, unaware that his rucsack including his notebook, the volume of Horace’s Odes given to him by his mother, and his last four pounds in the world was about to disappear taken by his neighbour in the jugendherberge .

When I entered that vast temple to beer, sausage and sauerkraut, I instantly felt like I had been there before, and indeed I had when I read Paddy’s finest work. Instantly I wanted to visit the chamber bursting with SA men singing ‘Lore, lore, lore’, and overweight young German burghers ‘as wide as casks ’ who were ‘… nimbly, packing in forkload on forkload of ham, salami, frankfurter, krenwurst, and blutwurst’ and lifting stone tankards ‘for long swallows of liquid which sprang out again instantaneously on cheek and brow.’ Had it not been for the fact that this was midday instead of night I am sure I would have found it barely changed, save for the SA men, whose children and grandchildren (all ageing now) have taken up residency.

My wife and I were in Munich after taking the overnight sleeper from Paris Est to Munich on our journey to see the Passionspiele at Oberammergau. We had arrived at the relatively ungodly hour of seven o’clock in the morning and had seen Munich come to life on a Saturday morning.

At that time of day the air has a freshly bathed, cool freshness that excites all the senses. The Alt Stadt was almost exclusively ours apart from some stall holders preparing their wares of ripe and juicy, brightly coloured fruit and vegetables for the Saturday market; two young men demonstrating their ability on MX bikes beside a fountain; and a couple of drunks who had obviously made the most of the warm Friday evening and had now belatedly discovered that the party was over.

During the war Munich was severely bombed by the Americans. I recall when on a NATO course at the German Pioneerschule in the 1980’s a particularly loud American officer asking in all seriousness, whilst we were on a tour of the city, “How the hell did we miss that?” when seeing the massive towers and basilica of the Dom. Well, of course the USAF did not miss it. Seventy per cent of Munich was destroyed by the bombing and after the war there was a serious proposal to abandon the city and rebuild nearby. Fortunately for the Hofbräuhaus (which sustained minor damage), and for us, it was decided to rebuild the city. Many of the older buildings, as with so many German cities, were painstakingly restored. The Dom and the Hofbräuhaus were amongst these.

Following a morning of strolling around the centre, visiting some of the sights, drinking känchen’s of schokolade and eating cinnamon flavoured kuchen I was desperate to find the Hofbräuhaus. I was determined we would not to make the same mistake as Paddy and end up miles away; although the prospect of doing so and having a couple of himbergeist to see us on our way was not so unappealing!

We followed a lederhosen clad gentleman …

Inadvertently we had somehow attached ourselves to an American tour party and listened patiently whilst the bored German tour guide briefed them all on practical logistics like not entering their PIN number more than twice in those mysterious, rapacious German cash machines, and what they might see on their one hour of ‘freedom from the group’ until it was time to meet up again, climb into their coach and visit yet another city – ‘It’s Saturday it must be …..’

When it came to question time I asked where I might find the Hofbräuhaus. The guide looked quizzically at me, thinking I must have some obscure mid-western American accent (when had I joined her group???) and told me in all seriousness that eleven o’clock in the morning was rather too early to make such a visit and drink beer. I persisted and reluctantly she gave me directions.

We walked in the sunshine past the old schloss and down a lane to the ‘slanting piazza’ but I do not recall the ‘Virgin on a column presiding over all she surveyed.’ We followed a lederhosen clad gentleman wearing a traditional Bavarian felt hat which was adorned by the most amazing plume, reminding me of something that may have been worn by a Roman First Spear Centurion to enable his men to identify him in the midst of battle.

There before us was our goal. Gothic and grand just as Paddy described it. We entered through wide doors underneath the rolling Gothic arches and walked up those vaulted stairs which survived the damage of the war. It was here in January 1934 that Paddy encountered his Brownshirt. The steps are now lined with photographs, one of a maternal looking frau holding eight heavy steins full of the cool, golden Hofbräuhaus beer. Perhaps she had served Paddy on that famous, alcohol fuelled night?

The Hofbräuhaus has four floors devoted to the adoration of beer, sausage and pretzels, where the weary, penitent pilgrim can atone. Each floor is decorated in a different style with a large communal drinking hall, and a number of smaller private function rooms (all of which are for hire). It was on one of these higher floors that Paddy stumbled into the hall full of ‘SS officers, Gruppen and Sturmbannfuhrers, black from their lightening-flash-collars to the forest of tall boots underneath the table.’

The highest floor is dominated by a large parquet floored room with a vaulted ceiling colourfully decorated with the predominantly pink and blue frescos of Bavarian coats of arms. This, the Festival Hall, was built in 1589. It is light and airy with broad windows on each side, large chandeliers and is dominated by a small stage with heavy, theatrically red, velvet curtains. The Hall can seat over 900 on its long tables arrayed in neat rows before the stage, and gives the impression of being eternally ready for a party. Indeed on the occasion of our visit, it was being prepared for the post- Abitur celebration for a very lucky young girl. The mood darkens somewhat when you know that it was in this very room, standing on that same stage, that the ambitious politician Adolf Hitler addressed his followers in the early days of the National Socialist Party in the late 1920’s and early 1930’s. 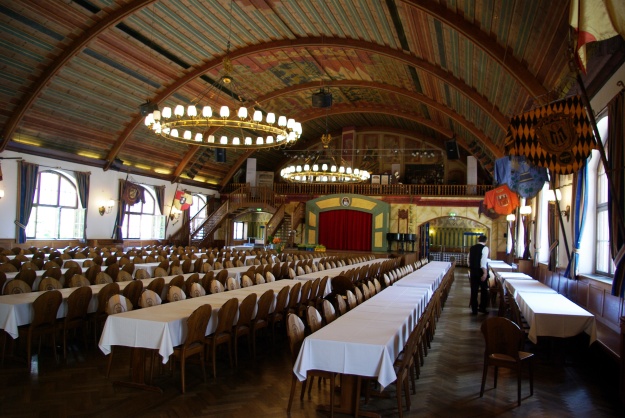 Given the passage of time this place has ceased to have any sinister effect, but it is a sobering thought, and it brought to life a period of history, and its aftermath, that has come to dominate my generation, and certainly those preceding us. 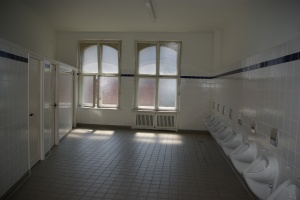 It was about this time that I needed to answer the call of nature and I sought out a gentleman’s lavatory. Finding one at the end of a corridor leading from The Festival Hall, I hypothesised that perhaps Hitler had, on more than one occasion, made this same trip, accompanied by Herman Göring, and discussed the finer points of how to grab political power, create a Third Reich, and bring revenge on all those who had sought to so humiliate Germany via the Treaty of Versailles.

Like Paddy we were now guided right down to the bottom of the stairs, out of the doors and back through another larger door on the ground floor. After passing the obligatory ‘Hofbräuhaus shopping experience’ we entered a new hall where the ‘vaults of the great chamber’ did not fade ‘into infinity through blue strata of smoke’ as this was, unbelievably, 21st century, smoke-free Germany.

Drinking cool beer in The Schwemme

It was here that Paddy found the part of ‘the Bastille’ he was seeking. The Schwemme is a huge, richly frescoed hall that wound this way and that, past herculean stone pillars, toward the altar of Hofbräu beer where a small army of male and female waiters attend upon the fountain of beer pouring forth litre upon litre of the marvelous nectar. And it did not stop there. What Paddy would have missed on a dark, cold, snowy night in 1934 was the courtyard beer garden which by now was filling with locals and tourists all keen to bathe in the unique Hofbräuhaus atmosphere.

If you visit the website of the Hofbräuhaus you will see it includes a list of ‘regulars’; those who attend ‘services‘ on a regular basis, with the specific visit days recorded. They have reserved seats and for larger groups, or even families, whole tables are kept for them so that they can indulge and worship whilst listening to the suitably attired Bavarian band that have a dedicated stage in the centre of the hall. 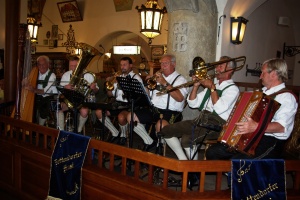 The band plays on

We had arrived early, at around 11.00 am and had spent forty-five minutes or so making our tour of the building. It was quiet, with just a few other like minded souls wandering around and the staff getting ready for the rush ahead. By midday we had chosen a table and ordered our first refreshing litre of beer, a Würstlplatte  and Spanferkel  (read the menu in English here). The Schwemme was now filling with crowds of locals and tourists alike and the band had struck up. If you want to visit the Hofbräuhaus to look around and then eat and drink as we did, I would recommend going early.

It was a wonderful visit, and one that was brought to life even more as we imagined that young traveller avoiding the Brownshirts and knocking back beer with the farming folk he found in the Schwemme. One thing that has not changed is the hospitality and friendliness of the Bavarian people, and it was with some reluctance that we walked out of the Hofbräuhaus into bright sunshine to a now busy city to catch our train to Oberammergau.

Now, where did I leave my rucksack?

A different version of this article was first published on the Patrick Leigh Fermor blog 26 July 2010.

2 thoughts on “On the same steps as Patrick Leigh Fermor”