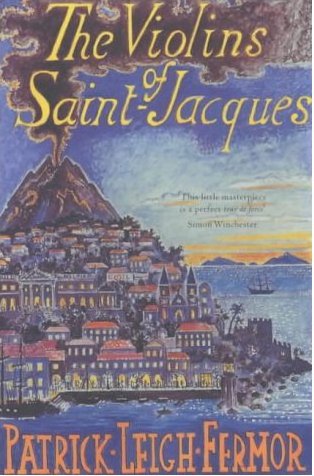 Finding online information about Paddy’s only novel (some call it a novella), The Violins of Saint-Jacques: A Tale of the Antilles, is very difficult. First published in 1953, the novel set in the Caribbean was adapted and set to music as an opera by the composer Sir Malcolm Williamson in 1966.

On an Aegean island one summer, an English traveller meets an enigmatic elderly Frenchwoman. He is captivated by a painting she owns of a busy Caribbean port overlooked by a volcano, and, in time, she shares the story of her youth there in the early twentieth century. Set in the tropical luxury of the island of Saint-Jacques, hers is a tale of romantic intrigue and decadence amongst the descendents of slaves and a fading French aristocracy. But on the night of the annual Mardi Gras ball, catastrophe overwhelms the island and the world she knew came to an abrupt and haunting end. The Violins of Saint-Jacques captures the unforeseen drama of forces beyond human control. Originally published in 1953, it was immediately hailed as a rare and exotic sweep of colour across the drab monochrome of the post-war years, and it has lost nothing of its original flavour.

I have the book which is nearing the top of a pile of books to read, and when I am done I will contribute my own short review. It is not a long book and one that some readers may wish to obtain to understand more about Paddy’s writing.

I have found a recent discussion of the book on a Spanish website. For those of you who have the language the article is here. It can be translated very roughly with Google translate. Despite the wrath of some who may say I should not use such translations on the blog, I will post the final couple of paragraphs as they are so positive:

After reading the novel, it is really hard to resist the temptation to trace the footprint of the Caribbean island and going to see if, indeed, between the islands of Dominica and Guadeloupe, in the days of carnival, you can hear the sound of ‘the Violins of Saint-Jacques’, “which rises to the surface of the water, as if a ball at the bottom of the sea.”

No need to travel so far, one thing is a lot easier to contrast: the violins played by Patrick Leigh Fermor in perfect harmony and incomparable beauty. Regardless of the notes to interpret, they sound wonderful.