An event in memory of the late English artist was held last week at the British Embassy in Athens, and Paddy was there.

The early works of John Craxton evoked an ‘arcadian’ feel but later became more schematic. Cubism and other 20th-century movements had an influence on his work.

When the late English painter John Craxton (1922-2009) first visited Greece in the mid-1940s he discovered what he called “human identities,” a world that suited him and was to soon become his home.

In the 60s Craxton settled in Hania, Crete, in a house facing the old harbor. He led a simple bohemian life, appreciated the local lifestyle and explored the country’s cultural history, especially the Byzantine churches on the island. For many years, he also served as as Britain’s consular correspondent in Hania.

His friends and the people close to him, who gathered last week at the British Embassy in an event dedicated to Craxton’s memory, remember him as a talented artist, an intellectual, a generous, straightforward and well-mannered person who had humor, sophistication and an optimist view of life. A learned artist, Craxton was part of an intellectual international milieu.

Following an opening by British Ambassador to Athens Dr David Landsman, novelist and playwright Paris Takopoulos, who met Craxton in London in the late 1940s, referred to the artist’s knowledge of Greek modern culture and also spoke of the great value that Craxton placed on friendship. He also noted that Craxton was an excellent critic of art. 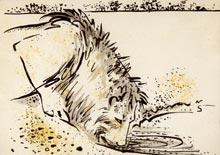 Maria Vassilaki, associate professor of Byzantine art at the University of Thessaly, was another longtime friend of Craxton. [Maria was co-curtaor of the Byzantium 330-1453 Exhibition – see myByzantine blog]

Vassilaki spoke of his [Craxton’s] deep knowlege of Byzantine art and of their long conversations on Byzantine art and culture, on which they had planned to publish a book. Craxton had abandoned the idea but Vassilaki has edited the book and plans to publish it with Crete University Press.

Journalist (formerly at Kathimerini) and writer Maria Karavia mused upon her memories of Craxton and his friendship with the painter Nikos Hadjikyriakos-Ghikas, with whom he stayed whenever he visited Athens. Her warm memories include Craxton’s tender and colorful use of the Greek language.

The British author Sir Patrick “Paddy” Leigh Fermor was also among the speakers. Craxton and Leigh Fermor had worked together on a number of projects, with the former illustrating the covers of many of the latter’s books.

Born to musician parents, Craxton was raised in an artistic and intellectual family. He studied art in Paris and, as a young artist, produced paintings of an “arcadian” feel. His first visits to Greece inspired him in the designs for a 1951 production of the ballet “Daphnis et Chloe” by the Royal Ballet.

A major retrospective on his work was held at the Whitechapel Art Gallery in 1967. In 1993, Craxton was elected Royal Academician by the Royal Academy of Arts, London.