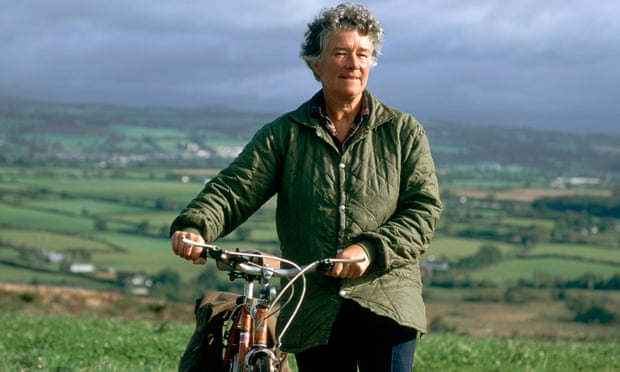 Dervla Murphy in 1990. She had a tolerance for hardship and a curiosity about everyday elsewheres, which she kept through half a century of advancing by bike, foot, mule and cart (she never drove a car) on and off road across four continents. Photograph: Gamma-Rapho/Getty

Travel writer who famously journeyed alone from her native Ireland to India on a bicycle, armed with a pistol and a compass

Dervla Murphy’s Full Tilt: Ireland to India With a Bicycle, published in 1965, is now as much a historical document of a gone world as a travel book, but its feeling of release, cycling towards a wide future while running away from a confined past, still exhilarates. Like notable 19th-century women travellers such as Isabella Bird Bishop, when at last released from a cage of domestic duty Murphy travelled, riding through the cold, snowy winter of 1962-63.

She went armed with a .25 pistol and basic instruction from the County Waterford gardai on how to use it, which she did to confront wolves and thieves, and also with the maps and compass through which she had explored the planet in her imagination since childhood. Most of all she had a tolerance for hardship (her total budget was £64) and a curiosity about everyday elsewheres, which she kept through half a century of advancing by bike, foot, mule and cart (she never drove a car) on and off road across four continents.

Murphy, who has died aged 90, wrote 26 books, many in the diary style of Full Tilt, approaching each day, person and place, fresh on the page as she had experienced it. That directness appealed to readers, along with Murphy’s viewpoint, which was novel because of her background: she was a voracious reader but with little formal education and, being from the Irish countryside, outside those higher levels of the class structure that dominated travel writing. Rural poverty around the globe was no surprise to Murphy, who had attended a village primary school with barefoot, hungry classmates, and knew families dying of tuberculosis.

She arrived alone at each destination without social introductions, was shy at home but en route talked with anyone who responded, and, in life as well as writing, downplayed risks and tribulations – from injury, sickness and assault to dirt and nothing for supper.

Aged 10, she had realised on riding her first bike that simple pedal power might one day take her to India, and on the way there she discovered how each day’s whizz of the wheels of her Armstrong Cadet cycle, Roz (short for Rozinante, Don Quixote’s horse), carried her forward to kind strangers’ hospitality. Coming fast down a mountain road always thrilled her; touring the Balkans in her 70s, she was clocked descending at 65mph by a military patrol and reproved for not applying her brakes.

Murphy’s attitude to gender and social norms was also uncommon at the time. Tall, deep-voiced, muscled, practical and with a decisiveness accrued from constant solo choices, she was often taken for a man by other societies, and occasionally romanticised the restricted roles of those societies’ womenfolk, which she would never have put up with herself. 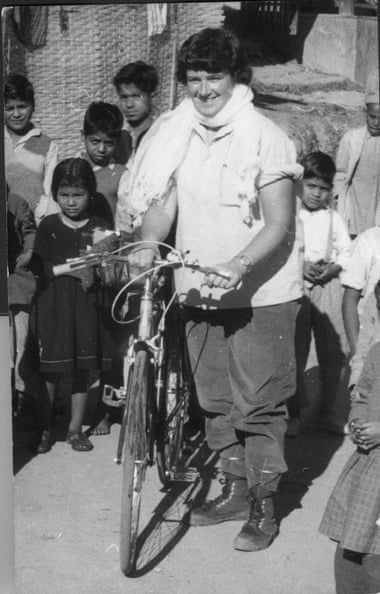 She was sure of her own life’s direction, if uncertain of its meanderings. She never intended to marry, but once able to support herself through writing, did want a child. Her daughter, Rachel, deliberately conceived with Terence de Vere White, the literary editor of the Irish Times, was born in 1968, and her mother raised her alone, never naming the father publicly until after his death in 1994.

Rachel had her fifth birthday in Kodagu (then called Coorg), south-west India, on the first of her journeys with her mother; they later went to Baltistan, Peru, Madagascar and Cameroon. Until Rachel reached puberty, when the people they met travelling began to regard her as an adult who shared a sealed bubble of foreignness with her mother, she was an asset, a connection to families, though also, sometimes, a distraction, interrupting Murphy’s communion with the deep, pre-modern silence of the Himalayas or Andes. Their relationship could be difficult, but it lasted, and in time Murphy, Rachel, and Rachel’s daughters, Rose, Clodagh and Zea, all dossed down together on a Cuban beach for a three-generation trip on the usual shoestring, in 2005.

Murphy’s own hard family situation had formed her, she wrote in Wheels Within Wheels (1979). Her parents went from Dublin to Lismore in Waterford when her father, Fergus Murphy, was appointed county librarian. Soon after Dervla’s birth, her mother, Kathleen, contracted a rare rheumatoid arthritis that crippled her: perhaps in compensation she nurtured Dervla’s daring, giving her that first bike despite money always being short. But, aged 14, Dervla was withdrawn from the Ursuline convent boarding school in Waterford to serve as Kathleen’s carer for 16 years. Kathleen encouraged her brief bike jaunts to England and Europe, though Dervla had to return from each few weeks’ freedom to burdensome duty.

Fergus died in 1961 and Kathleen the following year, leaving Murphy with a house, books (her lifetime collection grew to 9,000), strong convictions about political and social injustice, and her freedom. After Full Tilt, based on diaries published only because of a chance meeting in Delhi with Penelope Chetwode, John Betjeman’s wife, came Tibetan Foothold (1966) and The Waiting Land (1967), which grew out of work with Tibetan refugees in India and Nepal. From the late 1970s, the purpose of her travels shifted to inquiring into the effects of recent history on people and places, beginning with A Place Apart (1978), a bike ride round Northern Ireland, then at an implacable stage of its Troubles.

On a Greyhound bus crossing the US, she passed close to Three Mile Island, the site in 1979 of the US’s worst nuclear power accident, which inspired Nuclear Stakes, Race to the Finish (1982), the first of the books in which her politics mattered more than the travelling, through Kenya and Zimbabwe during the Aids epidemic, Romania after its revolution, Rwanda after genocide, the Balkans after a decade of wars.

These culminated with an unfinished trilogy on Palestinian territorial fragments – Gaza Strip, West Bank, Jordanian camps – researched as ever over coffee in crowded tenements or tea on tent floors. She was strongly for socialism, and against almost everything else, especially mass tourism.

A hip replacement after a fall in Jerusalem, aged almost 80, plus arthritis and emphysema, finally confined Murphy to her austere base in Lismore, the remnant of a 17th-century cattle market plus eccentric outbuildings, where she organised a travel-writing festival and received pilgrims, including Michael Palin, visiting for a television documentary, Who Is Dervla Murphy?, in 2016. She asked him to join her daily skinny dip in the River Blackwater.

Her daughter and granddaughters survive her.