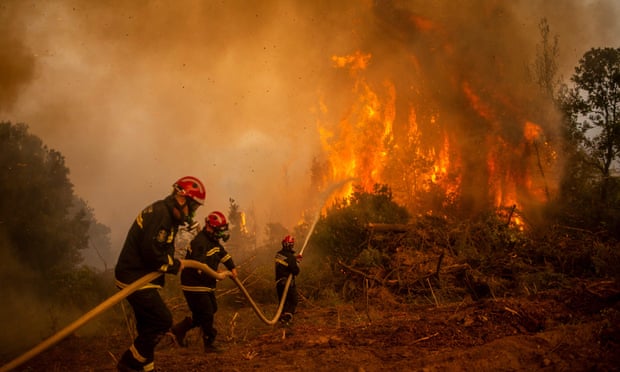 A team of firefighters from Serbia tries to extinguish a wildfire in the village of Glatsona on the Greek island of Evia. Photograph: Angelos Tzortzinis/AFP/Getty Images

We have all watched the wildfires around the globe with some degree of horror and awe this summer, perhaps even real trepidation about the future of this warming third rock from the sun that we inhabit. As I think about a trip to the Mani later this year, my thoughts have also been about what we might find there; will the hills around Kardamyli be fire blackened? How will things have changed? This moving article by David Patrikarakos gives us some idea of the impact beyond the dreadful burning of forests. It speaks of the personal impact, and how close things have come to places many of you know in the Mani.

First published in The Spectator

On 11 March this year my father passed away from prostate cancer after several weeks in a hospital in central Athens. As we sat around his bed, I remember thinking that I was watching 3,000 years of Greek history slowly perish before my eyes. My father was an only child, and I am British. His line of Greeks is at an end.

Now fires have ravaged Greece and the olive trees that stood in my ancestral village for centuries have burnt to the ground. This year has seen the almost literal burning away of my roots: because if I am British, I am also a Greek — of sorts. This much is inescapable. My name is Patrikarakos, Pa-tri-ka-ra-kos, which falls — like a slab of Cycladic marble — between me and those I meet. So luminously foreign, so palpably un-English. I remember as a child reading that Ian Fleming had chosen the name James Bond for the main character of a spy novel he wanted to write because its two blunt monosyllables were, he said, ‘brief, unromantic, Anglo-Saxon and very masculine’. What then of my endless syllables and vulgar vowels, which fuse together in ululating cadences, and sound so alien — and presumably feminine — to British ears?

If my name screams ‘foreign’ to the British it signals something else to Greeks. Its stem — ‘akos’ means only one thing: that I originate in the Mani, a region of the Peloponnese in southern Greece. The origins of the word ‘Mani’ mean ‘a sparse and treeless place’ — and it’s apt. The land is hot and arid, the terrain mountainous and inaccessible. It was only relatively recently that a road able to reach many of its villages was built. Previously they had been accessible only by sea.

The people, who claim descent from the ancient Spartans, are notoriously ungovernable. Mani is home to vendettas. For centuries families killed each other through the generations over long-forgotten disputes. When my father died, we pondered what to do with the old family rifle that had been passed down to him. It was beautiful: rich brown wood married to deep grey metal. I had visions of it hanging on my wall, speaking to a history that, though distant, is not forgotten. I called a contact at the police to check out the legality of this.

‘Hmmm,’ he told me over video call, scratching a stubbly chin. ‘Theoretically you need to take it to a police station where they can confirm it’s been decommissioned and then register it.’

He paused. ‘The thing is… this is from the Mani, right?’

I replied that it was.

‘Yeah, the problem is that every so often we get a gun in from there and it turns out to have been used to shoot someone in a vendetta years ago, which causes no end of problems. I’d just bin it if I were you.’

Since ancient times Maniots have been pirates and warriors — impossible to enslave. The Mani is mentioned in Homer’s ‘Catalogue of Ships’ in the Iliad, while the Maniots supplied Augustus with troops for his battle with Mark Antony and Cleopatra at Actium. During the Greek war of independence against the Turks, the Greeks emblazoned ‘Freedom or Death,’ on their flags. The Maniots, though, replaced ‘Freedom’ with ‘Victory’ because, of course, the Mani had always been free.

If the Mani is famous for war, it is also famous for its olive trees. Mine were in my ancestral village of Skamnaki — the name means little stool — in the region’s east, close to Gythion bay in the plateau between mount Taygetos and the sea. The olive groves stood among some fields down a slope not far away from the thick stone house that my pappoús, my grandfather, and his family grew up in.

Their loss has scarred the entire village. Some are inconsolable; these people grew up in the shadow of trees that are now reduced to ash. For Maniots, olive trees symbolise a deeper emotional relationship with place: if the Mani is unconquerable, it is in large part thanks to its olives, through which the people could trade and feed themselves. Mani’s famous independence is inseparable from its trees. When enemies want to hurt the region it is the trees they attack. During the 1821 war of independence, Ibrahim Pasha ordered his army to burn several Mani villages to the ground, torching the olive trees in each one. The local population starved to death.

Patrick Leigh Fermor, the English travel writer who lived in Mani, talks about the importance of the olive harvest there. ‘Each tree has its personality,’ he tells us. ‘Every branch and knot and hole is familiar, and to damage one is an unlucky, almost a wicked act.’ This is because if the trees mark this land they also demarcate its people. Maniots are not Cretans for many reasons, but not least because they don’t beat their olive branches to make the olives fall as Cretans do — they don’t want to bruise the trees. They have a deeper connection with them. They know that trees surround their houses, their buildings, their churches.

And if the trees sit at the heart of community life, they have also powered social progress. For years, women were barred from taking part in almost all activities outside of the home except for the harvest: then they would put on old clothes and go out into the groves with the men and children. Everyone understood this relationship, which was clear and synergistic. The people tend the trees, and in return the trees give them olives — the source of life.

In the end, we cannot escape our roots. Here, it is the roots of the trees that sit deep in the ground, anchored to the soil and the story of families. Every Maniot understands that their history is interwoven with the olive trees — the two sets of roots perennially intertwined, indivisible from the land. It is something that I too now finally understand — if only in their demise. The fires in Greece have meant for me, not just the destruction of some vines but a rupture with history itself, and for my family, they have meant that once again we will come together this year to mourn death.

2 thoughts on “My roots burnt with Greece”