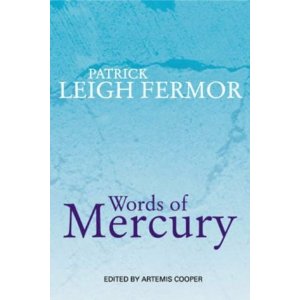 It’s been a while since I last made a post. A combination of factors is the cause, including, if I may say, partly due to Lockdown lethargy. It is all getting a little boring now, with the highlight of the week being a choice of which supermarket to visit just for a change. In fact, we are enjoying visiting all the different good quality independent bakers, butchers and green grocers who appear to be doing a booming trade.

Regular correspondent Brent McCunn sent me this a little while ago, which is the first post of 2021, a year which will mark the tenth anniversary of Paddy’s death.

Many will have a copy of Words of Mercury (the link takes you to my Amazon seller page where you can buy very good condition first editions), the 2003 compilation, edited by Artemis Cooper, of some of Paddy’s lesser known works including magazine articles. On page 51 we have Rumania – The Last Day of Peace, which is from the introduction to Matila Ghyka’s, The World Mine Oyster, 1961. It is a haunting piece, that last day of true joy before the darkness that would fall over all of Europe, and change the Between the Woods and the Water world forever.

Brent has found this slighty longer version which appeared in Picnic Papers, published in 1983, compiled and edited by Susanna Johnstone and Anne Tennant.

You may have come across it, but if not here attached are scans of his contribution. The book comprises offerings from many of literary, artistic and upper crust society. The likes of Diana Cooper and Derek Hill also included recipes related to their favoured picnic food. None were forthcoming from Paddy. Interesting in that Derek Hills’ portrait of PLF is in Gika’s house museum in Athens, if I recall correctly. Hill painted many from society and the arts. I met Hill in 1980. I was working at a stately home in Yorkshire and he came to paint the owner’s portrait. I had several interesting chats and was allowed to watch parts of the painting procedure.

I am a keen hobby cook hence the cuisine section.