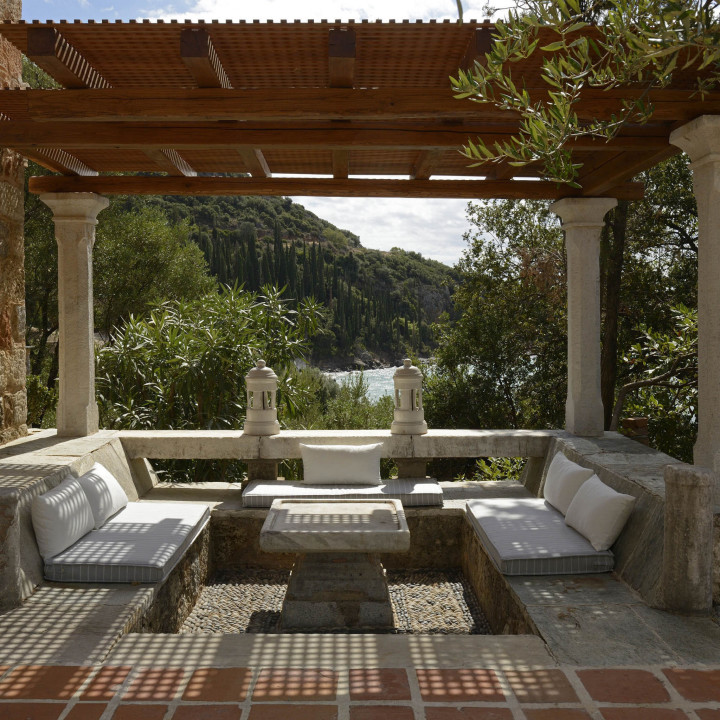 Paddy’s house is open for guests from 1 July, but the costs are high, and most “adoring fans” are unlikely to be able to afford the prices. This article sums it up  – ‘the house has been modernised to entice the kind of people wealthy enough to rent it’. It strikes me that we should suggest to the Benaki to set aside 2-4 weeks per season for lower cost rental and application by lottery for those less able to afford it. Are these prices in-line with the spirit of Paddy’s wishes?

First published in the Financial Times 23 May 2020

It was February, and I was inching towards the waves that lap Kalamitsi beach, just south of the village of Kardamyli. The brilliant morning light — sharper than the haze of summer — fell on cliffs fringed by cypress trees; beyond them were orange and lemon groves, and the distant bleat of goats. There was no sign of human life. I am usually a fair-weather swimmer but the blue-green water was exhilarating, clear to the white sand and rocks below.

I looked back to shore; peeking out of the treetops was the honey-coloured house belonging to the English adventurer, Hellenophile and former second world war spy Patrick Leigh Fermor.

He designed and built it in the mid-1960s with his wife Joan and their architect friend Nikos Hatzimichalis. Most of the stone, prised from the foothills of the Taygetus range, was brought by mule; some large pieces were manhandled by Leigh Fermor and his team of local masons, “sweating and tottering” as they moved them into position.

About 500 metres from the beach below the house is a small, forest-covered island. Every day, until two years before he died in 2011, aged 96, Leigh Fermor would swim around the island and back, emerging “svelter and browner with every passing day”, as he wrote in a letter in 1985. I took a few, frozen strokes in its direction before swimming as fast as I could back to shore.

The house is almost as celebrated as the man himself, and there has been much excitement about its reopening. With no children to inherit it, the writer bequeathed it to the Benaki Museum, an Athens art museum founded by his friend Antonis Benaki. Leigh Fermor specified that he wanted his home used as a writers’ retreat, while acknowledging that this would be expensive, and granting permission for its rental in summer months.

After a painstaking renovation, it will finally receive its first paying guests on July 1, a fortnight after the easing of lockdown restrictions allows Greece’s seasonal hotels and villas to open up. It can be booked in its entirety, for up to 10, or as three self-contained parts: the main house, for six, and the guest house and “traditional house”, both sleeping two.

When I knocked on the imposing double gate, a smiling, middle-aged lady opened it — Elpida Belogianni, who worked as Leigh Fermor’s housekeeper in the final decade of his life. Behind her, workmen strolled around a manicured garden stretching down to the sea, and electricians checked newly installed air-conditioning units. “Come,” said Elpida, ushering me in.

I knew from photos that the house was beautiful, but I was unprepared for the way it lays itself open to the sea and sky. 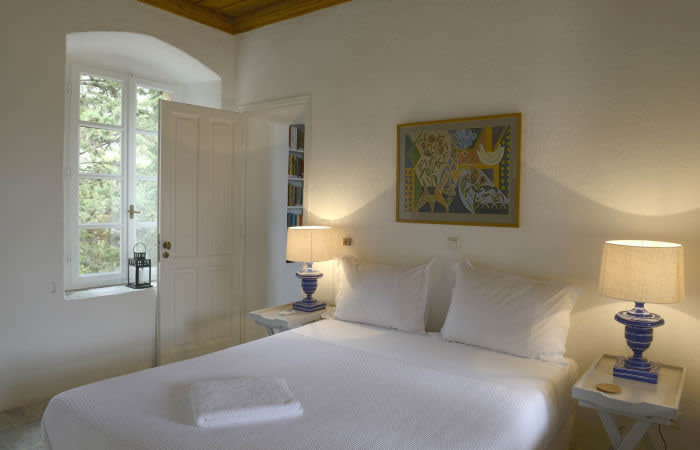 Medieval arches wind around the main house, mimicking a Byzantine monastery. The walls, a metre thick to keep out the summer heat, are covered in art (the most valuable paintings by Leigh Fermor’s friends — Edward Lear, John Craxton and Nikos Ghika among them — have been replaced with facsimiles). On the terrace, the pebble mosaics reveal paw prints (cats were Joan’s favourite animal) and a winding snake (Patrick’s), while painted snakes grace almost every room of the house.

In his study, I noticed an anachronistic-looking copy of Gone Girl (second edition, 2013), presumably abandoned by a passing visitor but nevertheless duly catalogued by the Benaki Museum; Leigh Fermor’s signature in Greek characters had been stamped on its inside page.

Inevitably, the house has been modernised to entice the kind of people wealthy enough to rent it — each bedroom now has a television, and a newly built swimming pool is visible in the lower garden, just above the beach (“Paddy would have hated it,” Elpida confided). Leigh Fermor was house-proud, but also liked the shabbiness of his creation, as he explained in the 1986 anthology The Englishman’s Room: “The room and its offshoots sound grander than they are; but from the stern Mitford test — ‘All nice rooms are a bit shabby’ — the place comes out with flying colours [thanks to] time, wear, and four-footed fellow-inmates.”

When the Leigh Fermors arrived in Kardamyli in the 1960s, they had very few neighbours — the tiny chapel near their house, dedicated to the archangels Gabriel and Michali, was almost a personal one. Now, in part due to its extraordinary natural beauty and in part to his legacy, the bay has become a popular destination for both Greek and foreign tourists, especially for hikers.

The morning before my swim, I had set out on the mountain trail from Kardamyli to Sparta, a path much trodden by Leigh Fermor himself, and described in his book Mani (1958). I climbed up past medieval tower houses, surrounded by colour: almond blossom, anemones, irises and mysterious wildflowers; soon, the sea fell away behind me and ahead of me the last of the snow was visible on Mount Taygetus. For those wanting to experience the magic that kept Leigh Fermor here for nearly half a century, the view from the mountain to his house will reveal even more, perhaps, than the view from the sea to his house.