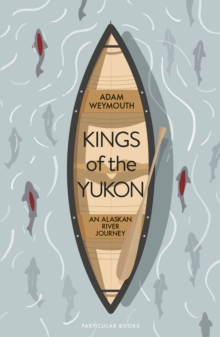 It is rare for writers of the stature of Susan Hill to say “I was knocked sideways by this book”. Author Kamila Shamsie thought Kings of the Yukon: An Alaskan River Journey

Travel author Adam Weymouth has scooped the £5,000 Sunday Times/Peters Fraser + Dunlop Young Writer of the Year Award for Kings of the Yukon: An Alaskan River Journey

(Particular Books), about his four-month canoe trip through an Alaskan river’s remotest reaches, following “strong, excited consensus” from the judges.

The author who lives on a 100-year-old narrowboat on the River Lea in east London was announced as the winner on Thursday evening (6th December) at a ceremony at the London Library. His debut, Kings of the Yukon: An Alaskan River Journey

, follows his four-month “canoe odyssey” along Alaska’s Yukon river and the salmon who return to it, published by Penguin imprint Particular Books in April this year, after being bought at auction in 2015.

“The result is a captivating, lyrical portrait of the people and landscapes he encounters – and an elegiac glimpse into a disappearing world,” prize organisers said, with judges comparing him to Patrick Leigh Fermor and author Robert Macfarlane.

Sunday Times literary editor Andrew Holgate, revealed he had failed to spot Weymouth and believes fellow journalists also missed a trick. “It feels as if we have found, ready minted and hidden in plain sight, a really outstanding new contemporary British voice – one who literary editors (myself included; I plead guilty) almost completely failed to spot on publication.” the judge said. “I’ve never seen such a strong and excited consensus among the judges for a winner.” Kings of the Yukon has so far sold 1,365 copies in hardback according to Nielsen BookScan.

The debut beat off competition for the £5,000 prize from the Women’s Prize for Fiction-shortlisted novelist Imogen Hermes Gowar for her debut The Mermaid and Mrs Hancock (Harvill Secker), Laura Freeman for her memoir about recovery through literature, The Reading Cure (Weidenfeld & Nicolson) and the Man Booker-shortlisted Fiona Mozley for Elmet (JM Originals), her Yorkshire-set debut about a family trying to find their place at the margins of society.

Author Kamila Shamsie, who was also on the judging panel, said: “Dazzling, often in unexpected ways, Adam Weymouth is a wonderful travel writer, nature writer, adventure writer – along the way, he is also a nuanced examiner of some of the world’s most fraught and urgent questions about the interconnectedness of people and the natural world.”

Fellow judge, writer Susan Hill said: “I was knocked sideways by this book and quite unexpectedly. Adam Weymouth takes his place beside the great travel writers like Chatwin, Thubron, Leigh Fermor, in one bound. But like their books this is about so much more than just travel.”

Holgate said: “Weymouth combines acute political, personal and ecological understanding, with the most beautiful writing reminiscent of a young Robert Macfarlane…He is, I have no doubt, a significant voice for the future.”

Sponsored by literary agency Peters Fraser + Dunlop, the Young Writer of the Year Award runs in association with the University of Warwick. In addition to the prize money of £5,000, the winner is also awarded a 10-week residential course with the programme. All shortlisted authors receive overseas exposure through the British Council, the international partner of the prize.

Sounds like this could be an ideal surprise Christmas present. Buy Kings of the Yukon: An Alaskan River Journey