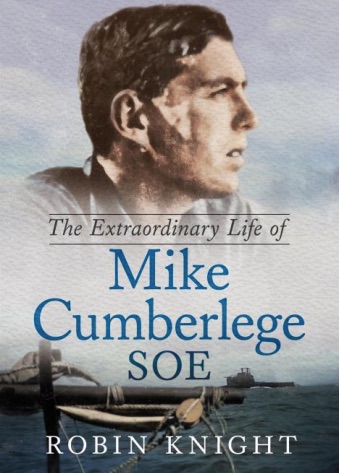 Great to have been contacted by Robin Knight the author of this book about a truly brave friend and colleague of Paddy’s.

This first-ever biography of Lt. Cdr Mike Cumberlege DSO & Bar, Greek Medal of Honour, murdered in Sachsenhausen concentration camp in February-March 1945, recalls a man who was ‘truly Elizabethan in character – a combination of gaiety and solidity and sensitiveness and poetry with daring and adventurousness – and great courage.’

Cumberlege came from a maverick sea-going family. He was highly resourceful and lived by his wits, skippering ocean-going yachts for wealthy Americans before the war. In 1936, he married Nancy; their relationship was close and, with the sea, forms a thread in The Extraordinary Life of Mike Cumberlege SOE.

From 1940, Cumberlege served in undercover roles in the Royal Navy in Marseilles and Cape Verde and was on the staff of General de Gaulle in London. Posted to Egypt in 1941 in the SOE, he formed a para-naval force of fishing vessels, took part in fighting in Greece, attacked the Corinth Canal, escaped from Crete, was wounded and returned three times to Crete clandestinely. On a second operation to destroy the Corinth Canal in 1943, he was captured. Tortured in Mauthausen concentration camp, he was transferred to Sachsenhausen and spent twenty-one months in solitary confinement.

The book contains unique material gathered from the family and from well-wishers in places as far apart as Ukraine, Australia and the US.

The book can be purchased at Fonthill Media for £17.50 or on Amazon