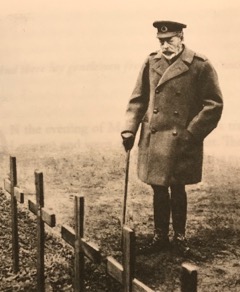 Whilst I have been away for the last few weeks on my own pilgrimage (again!!) to Santiago de Compostela, my good friend Harry Bucknall sent me some information about the republication of a book about a personal pilgrimage of King George V in 1922. It is now almost lost to the sands of time that our King, George V, went on pilgrimage to pay homage at the graves of the million or so war dead who not only gave their lives for our freedom but whose loss would scar a generation with grief.

This humble journey, recorded by the great war journalist, Sir Frank Fox, was written up in a little known but touching, moving and delightful book, The King’s Pilgrimage, which has been beautifully and faithfully reproduced by Fox’s Great Grandson, Charles Goodson-Wickes especially to mark the centenary of the Armistice in 1918.

“In the course of my pilgrimage, I have many times asked myself whether there can be more potent advocates of peace … than the massed multitude of silent witnesses to the desolation of war.” King George V, France 1922

This is a special book, and one as a former soldiers, Harry and I believe, every household should own … lest we forget. 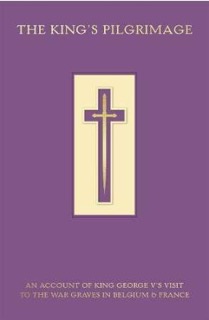 Dr Charles Goodson-Wickes invites you to the re-launch of this book at Sarum College, 19 The Close, Salisbury SP1 2EE on Monday 5th November 2018. His his Great Grandfather, Sir Frank Fox OBE, British War Correspondent was attached to the Royal Party and wrote this account of the events.

Drinks 6.30 – 8.30pm
7pm In conversation with Harry Bucknall
NOTE: FOR SECURITY REASONS, PLEASE REPLY BY 30th OCTOBER – I am sure this can be waived a little, but please RVSP asp.

Sir Frank Fox (1874-1960) was an Australian born Journalist, Soldier, Author and Campaigner who lived in Britain from 1909 and wrote over 33 books.

Having warned on public platform and in the press of an impending war, he was appointed to the Morning Post and sent as their war correspondent to the Balkans. He was then attached to the Belgian Army and recorded the German invasion of 1914 in The Agony of Belgium. After being wounded, Fox served on Haig’s staff, which he wrote revealingly about in GHQ – both books recently republished.

Motivated by the atrocities he witnessed in Belgium, Fox was commissioned into the British Army at the age of 41. Appointed an O.B.E. (Military) and Mentioned in Dispatches, he was knighted by King George V in 1926.

If you can’t make the event you can still purchase the book at Amazon: The King’s Pilgrimage: An Account of King George V’s Visit to the War Graves in Belgium and France

“Marks the full stop to the Great War. It is a very special book”
Field Marshal the Lord Bramall

“No better way to commemorate the Centenary of the Armistice than this account of King George V’s homage to the Fallen”
The Rt Hon the Lord Astor, Former Defence Minister
and grandson of Field Marshal Earl Haig