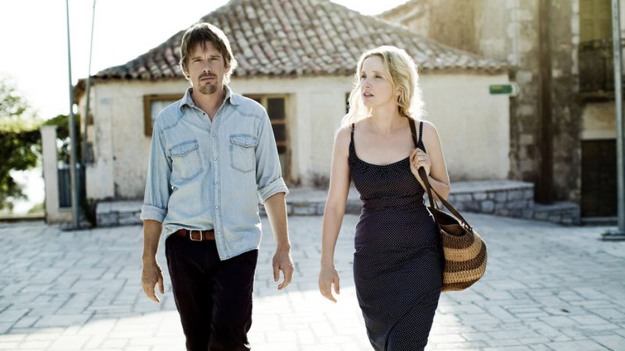 Ethan Hawke and Julie Delpy in “Before Midnight”

Things appear to have moved fast with the Before Midnight movie. In September we reported that filming had just taken place in Greece and at Paddy’s house at Kardamyli. The film appears to be complete and is currently premiering at the Sundance Film Festival in Utah (yes Utah).

The blurb from the festival says:

We meet Celine and Jesse nine years after their last rendezvous. Almost two decades have passed since their first encounter on a train bound for Vienna, and we now find them in their early forties in Greece. Before the clock strikes midnight, we will again become part of their story.

Director Richard Linklater continues his enchanting tale of a chance meeting between two strangers, bringing to it a nuanced perspective only gained by years lived. As it does in each film in the series, life carries with it new responsibilities and attitudes, forcing the two dreamers to reassess what they want next. Bolstered by an increasingly refined onscreen chemistry between lead actors Julie Delpy and Ethan Hawke, Before Midnight is a fitting third chapter in one of the great love stories of American independent cinema.

Apparently the next showing will be at the Berlin Film Festival.

Before Sunset sequel, Before Midnight movie shooting in Greece at Paddy’s House