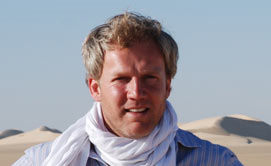 Door-stepping a 91-year-old knight of the realm, second world war hero and one of the finest writers in the English language is an awkward business. Particularly when he is hard at work in his home in the southern Peloponnese trying to finish the elusive third volume of what would be among the greatest trilogies in modern literature.

Yet this is no time for reticence. A man who kidnapped a German general on Crete in 1944 and then drove through 22 checkpoints impersonating him, before spiriting him on to a Cairo-bound submarine – having first bonded over a shared passion for Horace’s Odes – probably favours the direct approach. This, at least, is what I tell myself on arriving in the fishing village of Kardamyli in the Outer Mani, armed with all sorts of introductions to Sir Patrick Leigh Fermor.

In the event, Leigh Fermor, known to English friends as Paddy and to Greeks by his nom de guerre Mihali, could not be more charming when I ring him from a nearby hotel. He suggests lunch. I accept faster than you can say hero-worship.

The following day, the housekeeper waves me down a vaulted stone gallery, cool air ruffling through the arches, an architectural reminder, perhaps, of Byzantium, which, in a sense, has always been Leigh Fermor’s true north. It was to Constantinople – never Istanbul – that the 18-year-old set out on his serendipitous, marathon walking tour, a journey immortalised half a century later in the densely beautiful prose of A Time of Gifts (1977) and Between the Woods and the Water (1986).

His stint at King’s School Canterbury, where his housemaster diagnosed “a dangerous mixture of sophistication and recklessness”, had just come to a premature end with his expulsion for fraternising too closely with the town’s female population (women have always found him irresistible). Leigh Fermor notes proudly that Christopher Marlowe was another King’s man who got into high-spirited scrapes. His education after that – and all his books display the dazzling range of his erudition – was that of a freely roving autodidact.

From Byzantium I step back into England into the sort of room to make a writer swoon. Betjeman called it “one of the rooms in the world”. Whitewashed walls, stone floor and panelled wood ceiling frame a space that is both sitting room and library. Bookshelves rise from floor to ceiling. Light streams in from tall windows thrown open towards the sea. Piles of books jostle for Lebensraum with armchairs, cushions, icons, sculptures, maps, kilims. Browning, James Joyce, John Betjeman, several feet of dictionaries, atlases, Greek-English lexicons, pictures by the late Greek artist and Leigh Fermor’s friend Nikos Ghika. In Leigh Fermor’s words, “Where a man’s eleventh edition of the Encyclopaedia Britannica is, there shall his heart be also.”

For a moment, I think the man who stands up to greet me in this literary Elysium must be a house guest, since he looks no more than 70.

“How very nice to see you,” he says. His English is polished gravel, the voice of a more civilised generation. He is clasping a Loebb edition of Herodotus and is alarmingly handsome, which means that this must be the nonagenarian Leigh Fermor, no youthful house guest. In various letters despatched to Greece I have asked, rather clumsily, if we can talk about Herodotus for a book project.

“You’ve kept me up till 1.30 in the morning with this,” he says breezily. “I’ve been reading about the battle of Marathon.”

I apologise for inflicting the Father of History on him. “Absolutely not. He’s rather engaging. Now what would you like to drink? My sight’s not very good so do help yourself.”

We walk over to a table lost beneath a shimmering forest of glass bottles. Leigh Fermor has an enviable head of hair and is crisply dressed in blue checked shirt, russet tie, a blue jumper and corduroys. Red socks betray a note of flamboyance. A more debonair specimen of the literary man of action would be difficult to imagine.

“I’ve already had a vodka and tonic so I won’t have anything,” he says. I pour myself a drink from a very large, obviously much used, green bottle with the handwritten legend “OUZO”. He draws alongside and joins me for a second vodka. His constitution is said by friends to be as robust as his wartime record.

So what news for Leigh Fermor devotees awaiting the third volume, which would see him reach his beloved Constantinople after all these decades?

“That’s the plan, of course,” he says. “I’ve been rereading my notes and getting things in order. Clearing the decks. But it’s all a bit grim. I’m finding writing rather difficult.” He says he has developed tunnel vision and at the moment is confronting the disconcerting sight of an interviewer with two pairs of eyes and four nostrils. He does not type, has never been very keen on dictating and has no secretary. We must keep our fingers crossed, while looking forward to Artemis Cooper’s biography.

“Charge on,” is the cue for lunch. We leave the library and return to the world of Byzantium, taking our places in the gallery at a table set for two. An arch encircles a sunlit scene of bougainvillea amid a diaphanous blaze of green foliage. Four well-fed cats hover expectantly and a squadron of buzzing flies makes merry around us. Centre stage is a large carafe of chilled white wine. In fact, it is retsina, for which my host apologises when I ask what we are drinking.

“I’m terribly sorry. Dreadfully rude of me. I didn’t ask you. I have some proper wine next door.”

Absolutely not. I have developed a taste for the stuff. He nods his vigorous approval. “I’ve been drinking it for 50 years and it’s done me no harm.”

In Mani, his celebrated travelogue on the southern Peloponnese, published in 1958 and described by this newspaper, together with Roumeli, its counterpart on northern Greece, as “two of the best travel books of the century”, he dwells on the improving qualities of retsina. He offers the delicious observation that “one of its secrets is drinking it with unstinted abundance. It seems to have an alliance with the air in the promotion of well-being. Many people think that it bestows the gift of bodily health as well; a belief I accept at once without further scrutiny.”

We set to our lunch of Herculean pork chops luxuriating on a bed of garlic and onions with spinach, potatoes and tzatziki. The retsina in the carafe descends with the winter sun. We talk about his latest honour from the Travellers Club, which last December presented a bust of Leigh Fermor, now sitting in pride of place alongside Sir Wilfred Thesiger, another of the club’s favourite sons and fellow soldier-writer.

“It’s all rather terrifying,” he says. Flattering, too? “Oh, rather!” The eyes twinkle.

In fact, Leigh Fermor has been serially honoured for his many achievements on the battlefield and in print. His typically dashing exploits in the Special Operations Executive, rubbing shoulders with David Stirling, Fitzroy Maclean and Wilfred Thesiger, above all the audacious kidnapping of General Kreipe on Crete, were recognised with a Distinguished Service Order. An OBE followed. He is an honorary citizen of Heraklion, Kardamyli and Gytheio. His first book, The Travellers Tree (1950), won the Heinemann Foundation Prize for Literature. In 2004, he was knighted for services to literature and Anglo-Greek relations.

Ice cream arrives. I ask him whether he shares the feeling of nostalgia and regret, so pervasive in Greece, at the loss of Constantinople to the Ottomans in 1453. His writing seems to reflect this pain.

“Only in a romantic sense,” he says. “You can’t just forget 2,500 years of history and call it Istanbul. I deplore the Turkish role in eastern Europe, but of course you can’t blame them. It would be like blaming the laws of hydrostatics for flood damage.”

Though he is not a political man, preferring to remain above or beyond the fray, he is, above all, a European. In the confrontation between east and west there seems little doubt as to where his sympathies lie. Does he feel the western world and its way of life are under threat?

“It does rather feel like that, though I haven’t been keeping up on it as much as I should have,” he replies.

Back to the library for Greek – not Turkish – coffee. There is a splendid photograph, taken recently, of Leigh Fermor and Earl Jellicoe, wartime comrade and commander of the Special Boat Service. Both men wear dark suits, their chests a riotous patchwork of medals. Leigh Fermor’s left hand rests jauntily on his hip. Even in his tenth decade, there is an unmistakable poise and swagger.

After coffee, we walk outside into the garden. Across the water to the west lies the rump of Messenia. Beneath us is Leigh Fermor’s private little cove and steps down to the sea. This is the house that Paddy built, with his late wife Joan, in the mid-1960s. He sits for a few photographs while we swap notes on travel writers young and old.

Bruce Chatwin was a frequent visitor to the Mani in the 1980s. “People have said I was a guru to him. It’s absolute nonsense. Bruce would have been appalled.” He considers him a marvellous writer and is a fan of Jan Morris, too. He abhors being called a travel writer, regarding it as a lesser category, “rather like being called a sports writer”.

I have trespassed on his time long enough. On our way out, he suddenly leads me to another building, half hidden by the olives and cypresses. A fleeting glimpse into his inner sanctum: papers everywhere, more zigzagging stacks of books, a towering blue and white ceramic light from Portugal. His hero Byron stares at us from a plate in the centre of a broad chimneypiece.

“Do drop in again if you’re ever in the area,” he says. I may have to leave my wife to become his amanuensis.

This man, I reflect, as I drive away from his secluded haven, who has walked across a continent, fallen in love and run away with a princess, fought for his country, kidnapped a general, built a house, written books of dreamlike brilliance, joined a Greek cavalry charge and lived long and exceedingly well, is a true knight. Quite possibly one of the very last.

Justin Marozzi is the author of a number of travel books his latest being the acclaimed The Man Who Invented History: Travels with Herodotus which includes the account of a lengthy retsina fuelled lunch with Paddy.