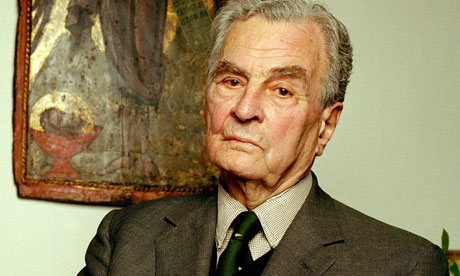 First published in the Guardian 10 June 2011

The writer Patrick Leigh Fermor, who walked his way into the eternal affection of restless souls with his account of a journey across Europe on foot, has died aged 96.

His editor at John Murray, Roland Phillips, said he was immensely sad that “such a great writer – a figure who was a hero to me long before I ever met him – has died” and hailed him as “the greatest travel writer of the 20th century”.

Leigh Fermor began his travels in December 1933, putting a school career he recalled as full of “discipline problems … like fighting, climbing out at night, losing my books” behind him with the idea of a “change of scenery”. Taking only a sleeping bag, the Oxford Book of English Verse and a volume of Horace, he walked up the Rhine and down the Danube, sleeping in barns and shepherd huts along the way, finally arriving at Constantinople in 1935.

With the second world war approaching he enlisted in the Irish Guards, and was awarded the DSO for his heroism as a member of the Special Operations Executive in German-occupied Crete. He met his wife, Joan, in 1946, living with her in cheap hotels and in friends’ houses during the 1950s while working as a journalist and writer.

An account of a journey to the West Indies, The Traveller’s Tree, was published in 1950 and found fame in Ian Fleming’s Live and Let Die, where James Bond is told it contains all he needs to know about the islands. Other journeys followed, including a slim volume recounting time spent in French monasteries, A Time to Keep Silence, published in 1957, and he moved to Greece in 1968. But it was the publication in 1977 of the first volume of his European odyssey, A Time of Gifts, which sealed his fame.

According to his biographer Artemis Cooper, the story of Leigh Fermor’s first expedition contains “very little analysis, it’s purely the beauty and the romance”.

“They’re very much books about memory,” she said. “They’re written by a man of 50, looking back at a boy of 18, evoking the joy of travelling while young – that amazing, honeyed time.” Although he had a visceral dislike of nazism, she continued, he wasn’t interested in the political turmoil sweeping through Europe in the 1930s. “He’s looking beyond reality to an idealised version of Europe without frontiers, seen through the eyes of painters such as Vermeer, Breughel and Altdorfer.”

“He is very much sui generis, standing apart from much modern travel writing, which is very gritty, very hard, very unromantic,” she said.

A second volume followed, Between the Woods and the Water, in 1986, leaving the author at the Iron Gate which marks the border between the Kingdom of Yugoslavia and Romania.

According to Phillips, Leigh Fermor was a “passionate rewriter”. “The story goes that he took several years to return the proofs of Between the Woods and the Water to John Murray,” he said, “and that they returned with every word rewritten in his scrawl.”

Readers are still awaiting the promised third leg of Leigh Fermor’s trip, despite the author’s repeated promises to “pull my socks up and get on with it” and his 2007 declaration that he was learning to type so that he could complete it more quickly.

Cooper, who visited him at his Greek home earlier this year, said that the writer had been working on corrections to a finished text. “A early draft of the third volume has existed for some time, and will be published in due course,” she said.