It may seem strange but Crows are some of my favourite birds and never before have I seen so many as when in Cluj.

I first wrote about them during a visit to the city back in September 2010. There were thousands of them, flying in their squadrons in two streams. They took many minutes to fly past and I wondered from whence they had come and where they were flying to. During my last visit I was told that they spend their days at the city rubbish dump and fly back into the city in the evening. So the mystery was solved, and indeed confirmed by others in the pictures below.

This morning we had some crows in our garden and I thought of those Cluj crows once more. To my delight I found some photographs  after a Google search and thought I would share them with you.

The poetry of Ted Hughes is also amongst my favourites. His 1970 collection Crow includes a number of dark poems where the crow is often portrayed as a dark protagonist. In 1985 Hughes explained his inspiration for Crow:

“Crow grew out of an invitation by Leonard Baskin to make a book with him simply about crows. He wanted an occasion to add more crows to all the crows that flock through his sculpture, drawings, and engravings in their various transformations. As the protagonist of a book, a crow would become symbolic in any author’s hands. And a symbolic crow lives a legendary life. That is how Crow took off.”

You can listen to Ted Hughes’ wonderfully soft Yorkshire voice as he reads from Crow in this You Tube video.

The copyright of the photographer’s below is acknowledged. 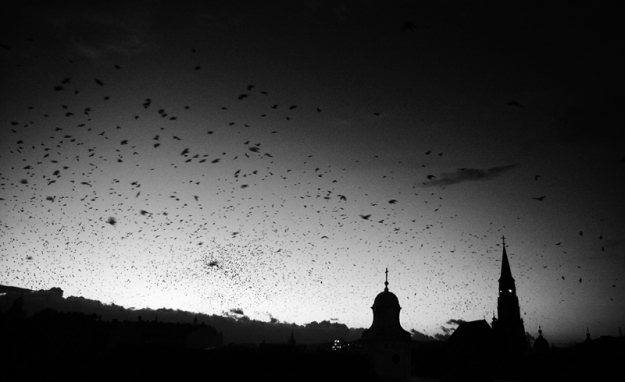 Crows over Cluj-Napoca by Dragos Ludusan

Crows across Cluj by theophilus_austin

2 thoughts on “The Crows of Cluj”