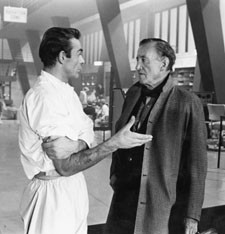 As background to the Imperial War Museum’s 2008-09 exhibition “For Your Eyes Only: Ian Fleming and James Bond” The New York Review of Books  featured a discussion of the merits of Ian Flemings’s work by Geoffrey Wheatcroft. Entitled ‘Bondage’ it is a wide-ranging review, and for shock factor it intially does tend to focus on Fleming’s penchant for what Wheatcroft calls ‘schoolboy sexual fantasies’. One critic found Fleming’s ‘sex distasteful—male brutality and female submission, or what Bond himself called “the sweet tang of rape”—he lamented Fleming’s “vulgarity and display” and his love of luxury goods.’

Well, that all makes for good reading but two things caught my eye. First of all there is some mild criticism for the overrated Sebastian Faulks and his 2008 attempt at writing a Bond story Devil May Care; more on Mr Faulks at a later date. Not only do I not particularly rate his writing (and I doubt he cares) but he is also a critic of Paddy’s.

The second was a letter that Paddy wrote to Ian Fleming picking him up on a point about Pol Roger champagne. Fleming was probably the first proponent of what would now be called ‘brand placement‘. As anyone who has read a Bond book or seen a film cannot fail to have missed, Bond does not get by with ‘Tesco Value’ when he can obtain a top brand alternative, presumably on Her Majesty’s expenses.

Paddy and Joan were friends of the Flemings, but, along with Debo Devonshire, were particularly close to Anne Fleming, and supported her through the difficult times following Ian’s death and his failure to get his estate in order. Read In Tearing Haste for more on this.

The particular part of the NYRB article that caught my attention is below, and shows Paddy’s excellent eye for detail, which we see constantly in his own work:

“While Devil May Care is short on sex and sadism, it does begin with one unfortunate having his tongue torn out; but then Faulks’s own tongue is a little too obviously in his cheek. We get Gorner, an impossibly horrible villain, a brutal enforcer called Chagrin (nice touch), a glamorous heroine with whom James is far too diffident—and a distinctly autumnal flavour. The book is set in 1967, when Fleming not only didn’t write it but could not have written it, and 007, as he admits, is showing his age. Now and again the writing flags. Bond has been in Tehran a few days when he lunches alone on caviar and martinis, before spreading out “some maps he had bought from the hotel shop…. The country was between Turkey to the west and Afghanistan to the east. Its southern frontier was the Persian Gulf, its northern limit the Caspian Sea.” Well, yes.

There are a few other lapses which it would be tedious to list, including a tennis match that is not only implausible in itself but whose scoring goes awry. We all make mistakes, including the originator. After Fleming published On Her Majesty’s Secret Service, that worldly sophisticate was mortified to receive a magisterial rebuke from his friend Patrick Leigh Fermor: Ian surely knew that Pol Roger is the only champagne never sold in half bottles.”

You can read the full article from the NYRB here. I will publish it at some later date for the archive.