Here is something completely ridiculous, a challenge for you all that recalls Paddy’s late night walk through Shepherd Market, London in early October 1992.

In a letter to Debo Devonshire dated 6 November 1992 (see page 293 of In Tearing Haste), Paddy writes to tell her of a strange experience just before he left for a trip to Antibes to collect a French literary prize for A Time of Gifts. Paddy and Joan had dinner with Magouche Fielding (Xan’s second wife). Joan left early and Paddy decided to walk home … “through Shepherd Market – my old haunt when young * – and into Market Mews. I had only gone a few paces when, on a wide black surface on the left side, I saw a strange message in huge letters in White:

What could it portend? It looked simultaneously insulting, enigmatic and vaguely improper, especially the message below.” 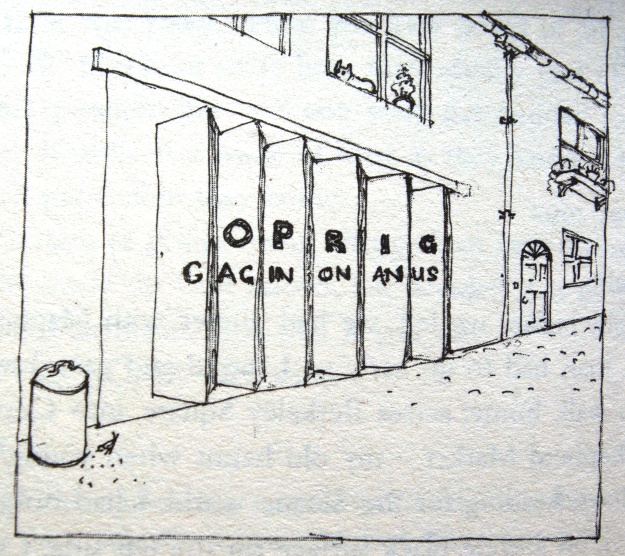 It was only when he stood four square in front that all was revealed – click here to see the picture.

The challenge therefore is for those of you who live in London, or who are visiting this month, to see if you can find GAGINONANUS. There are enough geographic clues, and to add to this Paddy further writes to Debo, “If on leaving your front door, passing the Curzon Cinema, and turning right into the Mews, you’ll [see it].”

Let’s hope that like for Paddy the concertina doors will be ajar so that you can see it just as Paddy did. Perhaps they have been painted over? Do they still exist?

If you find GAGINONANUS then send me a photograph (tsawford[at]btinternet.com) with a brief retelling of your search. Special merit if you can include a cat in the picture!

The prize? Well, the satisfaction of ‘being there and having done it’ and a first edition copy of Words of Mercury for the first person to send a picture.

I shall personally resist the temptation to find it until the end of August. If we have had no responses by then, I shall go on a search myself.