The first of a few articles reminding us of the genius of John Craxton as his new biography by Ian Collins – John Craxton: A Life of Gifts  – is published by Yale University Press.  Craxton was book cover artist for most of Paddy’s books, friend to Paddy and Joan, as well as Lucian Freud, and lover of Margot Fonteyn.

John Craxton disliked being described as a ‘neo-Romantic’ artist, preferring to be known as a ‘kind of Arcadian’. He spent most of his life in Crete, where his enjoyment of the Mediterranean lifestyle was in inverse proportion to the rate at which he finished his paintings (he termed it ‘procraxtonation’). He never quite shed the label of a promising talent who had failed to develop. But he did not regret moving away from England. His work may not be as celebrated as that of his friend Lucian Freud, with whom he first went to Greece in 1946 (and later fell out), but it has a joie de vivre that speaks of a life well lived, one in which Greece played a fundamental part. As he wrote later, he preferred to live ‘in an atmosphere where life is considered more important than art – where life is itself an Art’.

Those last words could be the strapline for ‘Charmed Lives in Greece’ at the British Museum. It focuses on three friends – Craxton, Patrick Leigh Fermor and Nikos Hadjikyriakos-Ghika – who met just after the Second World War and remained close for almost 50 years thanks to a shared attachment to the pleasures of Greek life. Through artwork, letters, photographs and notebooks, the exhibition builds up a kind of group biography, structured loosely around the various homes they made for themselves. 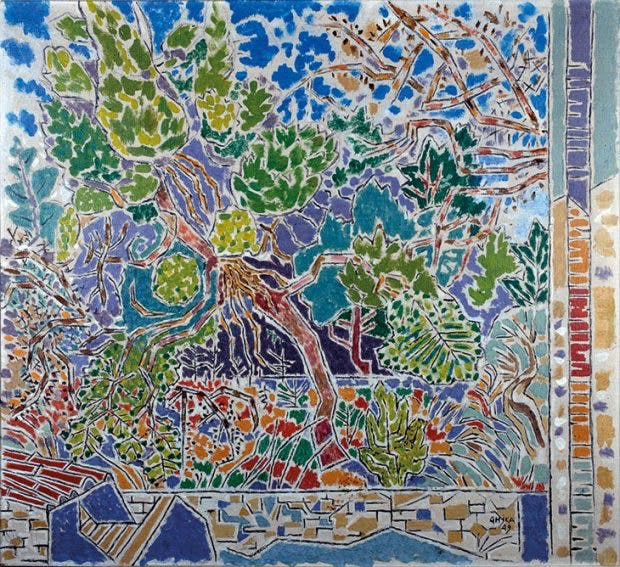 The most spectacular of these was Ghika’s family villa on the island of Hydra, with its nine terraces dug into the steep hillside overlooking the harbour. Born in 1906, the son of a distinguished admiral, Ghika was an elegant and much-liked painter who had studied in Paris during his youth, returning to Greece in the 1930s. Like several of his generation, he brought modernist sensibilities to bear on the renascent national culture of the period, and was a busy presence in Greek life. He set about restoring the Hydra house in 1936 and with his first wife made it a stopping point for anyone and everyone.

Leigh Fermor and his girlfriend (later wife) Joan became regular guests after the war. Paddy, as he was known, was famous around Greece for his exploits with the Cretan resistance against the Germans. In the early 1950s he and Joan stayed at Ghika’s house for two years while Ghika was travelling, during which time Paddy (never a stranger to using other people’s houses as writing retreats) constructed most of Mani (1958), his book about the southern Peloponnese. A product of his near-exhaustless curiosity about Greek history and culture, Mani is full of the lyricism and ebullience that defined his prose. Quotations from his writings are displayed around the exhibition, as evocative in their way as the many images. It was Craxton who illustrated the cover for Mani, and he did the same for all of Leigh Fermor’s subsequent books.

Craxton, too, stayed for long periods at Ghika’s house. He was impressed by the way Ghika’s art fused Cubist and Byzantine elements, and their influence on each other is clear when you see their paintings side by side. They both enjoyed painting the dramatic Hydra landscape. Craxton developed a palette that included near-fluorescent greens and blues, using them to convey the heat and light of the Greek terrain. A Hydra panorama from 1963–67 and a Cretan ravine painting from the early 1970s are some of the exhibition highlights.

In 1960, Craxton moved permanently to Crete, occupying an old Venetian house in the port of Chania. A photograph taken by John Donat from Craxton’s terrace that year, with the artist’s aluminium teapot on the stone in the foreground, a few fishermen in the harbour below and the sea stretching out above to fill most of the picture, magnificently evokes the Cretan atmosphere. A year later Ghika’s house in Hydra burned down, and soon afterwards he and his second wife converted an old olive press in Corfu. Around the same time, the Leigh Fermors built a home on the Peloponnese coast, near Kardamyli. A photograph from 1965 shows Leigh Fermor in a traditional dance with the local masons. They lived there for two years before getting a phone line or electricity.

There is pleasure – and a pleasurable sense of envy – to be had in this. It will be a rare visitor who steps out of the central London traffic to see ‘Charmed Lives in Greece’ and does not come away wishing that they too could live in a house by the sea with no phone or electricity. But there is also, perhaps inevitably, something too idyllic about it all. Political context is non-existent: there is no mention of the devastating Greek Civil War of 1946–49, for instance. On a personal level, we learn almost nothing about either Joan Leigh Fermor or Ghika’s two wives, or of what went on in their marriages, or about the sources of the money that enabled their lifestyles. The result is undeniably charming, but also superficial.

This is particularly noticeable in the catalogue. Ian Collins contributes an excellent essay on Craxton in Greece, but elsewhere critical faculties seem to have been abandoned. Thank-you letters comprise a significant primary source, and not even Leigh Fermor can be interesting when tossing out those. The focus on houses and decoration is reminiscent of World of Interiors. Given that one of the author-curators, Michael Llewellyn-Jones, is a former British ambassador to Greece, it is no surprise that the whole thing occasionally feels like an act of Anglo-Greek diplomacy (a field in which the British Museum has not always excelled).

Still, the book contains a wealth of archival documents and images, including some fine photographs that will be manna to Leigh Fermor’s many fans. Any exhibition that provides a chance to see Craxton’s paintings is enough to improve the mood. It’s in his Arcadian spirit that ‘Charmed Lives in Greece’ is best enjoyed.

Click this link to purchase a copy of John Craxton: A Life of Gifts