Nearly there…waiting in the rocky fissure outside Alones….

Paddy writes:
“Well, Herr Major, how are the plans for our departure progressing?” By now the General had become as solicitous for the success of our departure as we were.

It was true, the order of release or the promise of it, had come through. The German drive through the Asi Gonia mountains had driven Dennis to earth and put his set momentarily off the air. But messages from Cairo were beamed now to all stations and when the great news came through, Dick himself, hearing of our local troubles, and making a dash clean across the Nome of Retimo, reached our cheerless grotto long after dark. The boat would put in at a beach near Rodakino at 22 hours on the night of the 14th /15th May. – “10 o’clock tomorrow night!” It was in exactly a day from now. We would only just be able to manage it.

The thing was to get the main party to the coast under cover of darkness. I sent Billy off with George and the others and Yanni Katsias and his two wild boys by a short route which would bring them by daybreak to a place where they could wait for us. The General, Manoli and I would go by a much longer and safer way, where the mountains were so steep and deserted that, with a cloud of scouts out, we could move by day without much danger. Unfortunately it was too steep and uneven for a mule so the General would have to go on foot. But the sky was clear and there would be a bright moon and starlight.

The Krioneritis mountains which we were to cross are not one of the highest ranges of Crete, but they are among the steepest and are certainly the worst going. They are bare and, except for an occasional thistle or thornbush or sea squill, as empty of vegetation as a bone yard; the place is ringed with craters and fractured into a jig-saw of deep crevasses; worst of all there is not a path or even a flat square foot in the whole of this wilderness. The region is a never-ending upside-down harrow armed with millions of limestone sickles and daggers and yataghans.
Sustained perhaps by the thought of an end to his ordeal, the General tackled this Via Crucis with scarcely a groan. Helped by Manoli and me when he stumbled and then by the guerrillas that shimmered like ghosts out of the vacancy, he moved across the landscape in a sort of trance.” 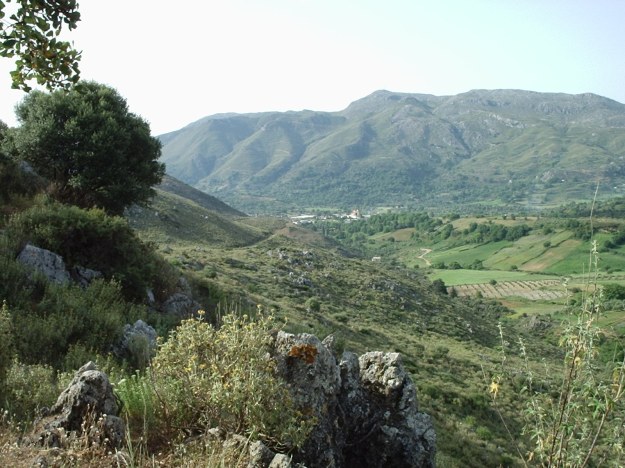