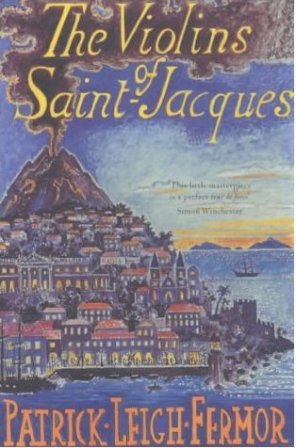 It’s not often that we get to see anything about Paddy’s one and only novel so I thought that you might like to see this recent review by Joe Blessing. Why not take some time to take a look at some of the interesting stuff on the blog about The Violins of Saint-Jacques?

“A ball is almost a short lifetime in itself… the ball goes on and on and the incidents stand out in retrospect like a life’s milestones against a flux of time whose miniature years are measured out in dance tunes.”—Berthe de Rennes

Most parties sadly cannot live up to those words, but the tragic Mardi Gras ball in The Violins of Saint-Jacques, spoken by protagonist Berthe de Rennes, truly contains multitudes. The extravagant soiree acts as a glittering prism, reflecting all facets of the culture and curiosities of the fictional Caribbean island of Saint-Jacques (modeled on Martinique) before the island’s daunting volcano erupts and erases the island forever.

The Violins of Saint-Jacques is a slim novel of beguiling contradictions. Though taking place largely over the course of one night, it still feels broad in scope, as the reverberations of that night ring out across the length of a well-traveled life. Another contradiction is that the accomplished novel, first published in 1953 and now reissued by New York Review Books, is the only work of fiction produced in a long life of writing by Patrick Leigh Fermor. Fermor, who died in 2011, lived larger than life in a manner rarely practiced anymore. Compared by some to his friend Ian Fleming’s most famous creation, James Bond, his wartime kidnapping of a German general on Crete was so adventuresome that the great British directors Powell and Pressburger made a film of it, Ill Met By Moonlight (1957) starring Dirk Bogarde as Fermor.

But Fermor is best remembered for an even more youthful endeavor, his 1933 journey by foot across an entire continent, from Belgium to Constantinople, which he began when he was just 18 and documented decades later in a trilogy of modern classics of travel writing, beginning with A Time of Gifts in 1977. His literary reputation rests largely on those books, which both channel his youthful exuberance and also overlay it with a lifetime of erudition, allowing him to expertly pick apart the varying threads of culture he found interwoven as he traversed Europe. Readers of those books will find that the same excellent eye for detail and deep curiosity about local customs in The Violins of Saint-Jacques, which gives a truly staggering amount of cultural detail in just 140 pages.

A brief frame story set on an Aegean island (the area where Fermor lived most of his life) finds a Fermor-like Englishman meeting the mysterious but well-loved Berthe de Rennes in her twilight years. When her painting of Saint-Jacques catches his eye, he entices her to tell its story, the story of her wondrously happy childhood on the colonial outpost, and the fateful Mardi Gras night in 1902 when it all was lost.

Berthe moved from France to Saint-Jacques after losing her parents as a teen, taken in by her distant cousin, the Count de Serindan, and his family. Berthe is soon a cherished member of the family and a confidant of the witty Count. The Count is the kind of splendid character little seen outside of books, a patriarch who uses his wealth and power solely for the pleasure and amusement of those around him. On occasions like Mardi Gras, this largesse extends to the entire island and he spares no expense in hosting lavish parties the entire population looks forward to.

Berthe begins her narration on the day preceding such a ball, leading the reader through the elaborate preparations and the fierce anticipation felt by the young Serindans, especially Berthe’s closest companion, Josephine. A ball might seem a flimsy subject to some, but Fermor’s accomplishment is to see in the ball an embodiment of the island’s society and to organically provide details that cohere into a surprisingly complex portrait. Fermor gives readers the provenance of the songs played, the steps of dances, the length of the swizzle sticks, the scents of the floral decorations, the ingredients of certain drinks, and perhaps most fun, the colors and creatures on the elaborate costumes the black islanders wear as they dance through the streets.

Nor does Fermor withhold human detail, expertly sketching the prejudices and tensions between the proudly Royalist and conservative Creole aristocracy and the new governor just arrived from France with modern ideas. Berthe must leave the party when she learns her beloved Josephine is eloping with the governor’s rakish (and already married) son, leading her to a ship off the island’s coast that saves her from, but allows her to witness, the biblical destruction that wipes the site of her happy childhood off the map.

The Violins of Saint-Jacques is so engrossing and brief that its flaws are easily overlooked. Fermor’s portrayal of any colonial life as idyllic might prove offensive to some, although he takes pains to distinguish the relatively peaceful race relations on Saint-Jacques from the brutal regimes on other nearby islands. The novel has a rather 19th century, predetermined approach to character and never takes the time to delve into any complex interiority or psychology. However, this approach is perhaps fitting in a story that’s not about human agency, but rather about the futility of it in the face of inhuman, impossibly powerful forces.

Fermor was an excellent student of culture, but his own wartime experiences gave him no illusions about their fragility. Despite all readers knowing the eruption is coming (it’s on the back of the book and heavily foreshadowed), it’s still a shock at how brutally and completely it destroys everything that Fermor has just taken such care in describing. The Violins of Saint-Jacques is a charming portrait of a lost world and a potent reminder of just how quickly a culture can disappear.