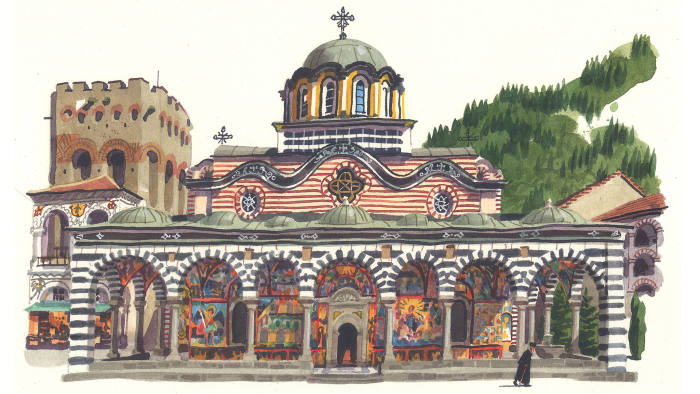 In a cramped office at Bulgaria’s Rila Monastery, a black-robed monk is swiping my passport. Set in a wooded valley 70 miles south of the capital Sofia, Rila is the country’s largest and oldest Orthodox Christian monastery, and a source of intense pride for Bulgarians. Travel writer Patrick Leigh Fermor stayed here in 1934 and found a place of “clattering hooves and constant arrivals and departures . . . like that of a castle in the Middle Ages.”

First published in the Financial Times

Today the clatter of hooves has been replaced by the rumbling tyres of tour buses and the monastery’s humbug-striped pillars and copper domes are one of Bulgaria’s major tourist attractions. One thing hasn’t changed: the monks still offer accommodation — there are 38 rooms available to pilgrims and non-believers alike. Stay the night and you can explore once the day trippers have departed.

The monastery was founded in the 10th century by the followers of St Ivan of Rila, a hermit who lived in a nearby mountain cave. Its library holds an important collection of medieval manuscripts and there are exceptional wood carvings, including the Cross of Rafail, which took 12 years of surgical chiselling to make, by which time its creator had lost his sight.

The surroundings are special too. The forested slopes that encircle the quadrangle are now a nature reserve with a network of hiking trails. After checking in to my room (basic but comfortable and en suite), I clump out over the cobbles and head for the summit of Dodov Vrah, a 2,597-metre peak that towers over the valley. The path ascends through a beech forest alive with cuckoos and drumming woodpeckers, eventually reaching an open landscape of tussocks, wild violets and creeping juniper bushes. This is halfway; I continue up past the tumbledown remains of shepherds’ huts to reach the snow drifts on the ridge.

From the summit I look north to the crags around the Seven Rila Lakes, then peer down to spot the red-tiled roof of the monastery, 1,500 metres below. The knee-jarring descent leaves me avoiding stairs for a week, but the river in the valley bottom provides a welcome ice bath for my feet.

No food is provided for guests, so I head to a nearby restaurant for a delicious meal of grilled local trout. A sign informs overnight visitors to return before the gates are locked at 8pm, so I gulp down my wine and rush back before curfew. With characteristic Bulgarian punctuality, the doors eventually swing shut at 9pm. Electric lights clunk on around the cloisters and the looming mountains turn a shade darker. Without the clamour of visitors’ voices, other sounds are amplified: the tinkle of the fountains, the screaming of the swifts wheeling around the courtyard, the gargled miaow of one of the monastery cats.

Church bells wake me early the next morning. I step out on to the creaking wooden veranda; overnight rain has drenched the cobbles and mist clings to the forested mountainsides. Apart from a group of doves purring and sipping from a puddle, the quadrangle is still. Inside the church, the monks have begun the morning service. They stand facing the ornate gold-plated iconostasis, a screen inlaid with icons that separates the main nave from the sanctuary, the holiest part of the church. Every so often, a robed figure appears through a door in the screen, vigorously distributing incense from a hanging censer.

After the service I speak to a monk in the reservations office, Hierodeacon Nektarii. In a soft, musical voice he tells me how he came to the monastery as a novice 10 years ago. There are just eight monks at Rila now, he says — in the 19th century there were 200. When the monastery became a national museum in 1961, the remaining monks were all moved out. “People asked: what kind of monastery has no monks? And a few years later a few of us were allowed to return.”

The gargantuan cooking utensils and 1,000-loaf bread oven displayed in the museum date from Rila’s 19th-century heyday. “On feast days the monastery attracted thousands of pilgrims,” Nektarii explains, “and we would feed them all”. Today’s operations are comparatively modest and Nektarii bakes the communion bread himself — still in a traditional ornamental mould “but we use a modern oven now”.

I pack my bags as the quadrangle begins to bustle with tourists again. As I head out past the tour groups and souvenir stands, I think about Nektarii’s description of the 19th-century monastery — a place of feasts, thronging with pilgrims — and of Leigh Fermor’s description of the carnival buzz of Rila. I feel a pang for the loss of that world but I won’t quickly forget the peace of Rila at dawn.

Details: Twin rooms at Rila Monastery cost from 50 levs (£22) and can be booked in person at the reservations office in the monastery or by phone (+359 07054 2208). For more general tourism information, see bulgariatravel.org