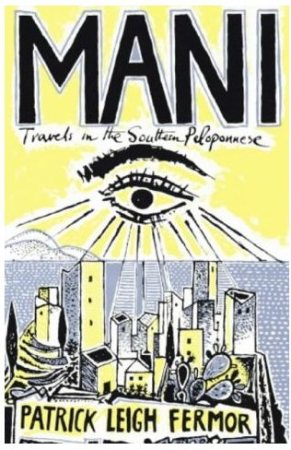 A short extract from Paddy’s masterpiece about Greece, the Mani, and a lost way of life. And of course he did stay.

Beyond the bars of my window the towers descended, their walls blazoned with diagonals of light and shade; and, through a wide gap, castellated villages were poised above the sea on coils of terraces. Through another gap our host’s second daughter, wide-hatted and perched on the back of a wooden sledge and grasping three reins, was sliding round and round a threshing floor behind a horse, a mule and a cow – the first cow I had seen in the Mani – all of them linked in a triple yoke. On a bank above this busy stone disc, the rest of the family were flinging wooden shovelfuls of wheat in the air for the grain to fall on outstretched coloured blankets while the husks drifted away. Others shook large sieves. The sun which climbed behind them outlined this group with a rim of gold and each time a winnower sent up his great fan, for long seconds the floating chaff embowered him in a gold mist.

The sun poured into this stone casket through deep embrasures. Dust gyrated along the shafts of sunlight like plankton under a microscope, and the room was full of the aroma of decay. There was a rusty double-barrelled gun in the corner, a couple of dog-eared Orthodox missals on the shelf, and, pinned to the wall above the table, a faded oleograph of King Constantine and Queen Sophia, with King George and the Queen Mother, Olga Feodorovna, smiling with time-dimmed benevolence through wreaths of laurel. Another picture showed King Constantine’s entry into re-conquered Salonika at the end of the Balkan war. On a poster, Petro Mavromichalis, the ex-war minister, between a pin-up girl cut-out from the cover of Romantzo and a 1926 calendar for the Be Smart Tailors of Madison Avenue, flashed goodwill from his paper monocle. Across this, in a hand unaccustomed to Latin script, Long live Uncle Truman was painstakingly inscribed.

From Mani: Travels in the Southern Peloponnese, by Patrick Leigh Fermor which you can buy here,

4 thoughts on “I felt like staying there for ever”