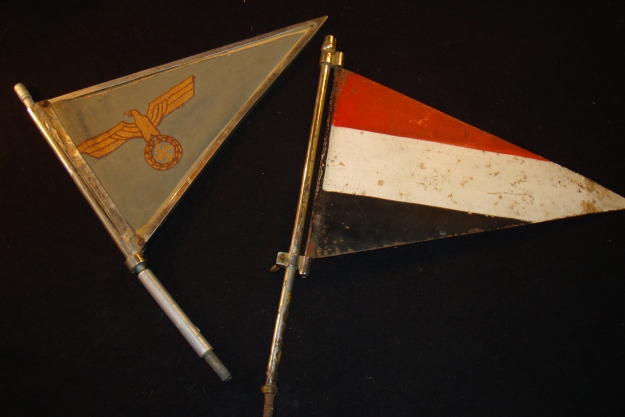 The pennants from General Kreipe’s car

Discovering the full details behind a particular story or event is often tricky with clarifications, enhancements, or downright contradictions emerging sometimes many years after the event. Fortunately we have not had to wait so long for some further detail to be added to the story I ran last year about what happened to the pennants on General Kreipe’s car at the time of the kidnap, and their subsequent discovery many years later.

‘Billy’ Moss’ daughter Gabriella Bullock read Artemis Cooper’s account of how the pennants were found after so many years in a trunk in Paddy’s house at Kardamyli. Gabriella then wrote to me to ask me to pass on the full story behind their (very fortunate) re-discovery in Ireland some years before and how they were passed by her mother (Sophie Moss née Tarnowksa) to her. It sounds like we are very lucky to have them at all.

Gabriella’s account starts during a recent visit to Crete …

In Rethymnon we met the delightful people who run the Folklore Museum. This is where the pennants from the General’s car are now housed, in accordance with PLF’s wishes. We found that they were very interested in the story of how the pennants were randomly and luckily rediscovered, and this leads me to think that the story definitely has a place on your website

In the early 1950s my family lived in Co. Cork, Ireland, but moved back (supposedly temporarily) to London in 1954. My parents intended to return, and left many of their possessions in the safe-keeping of various Irish friends or in store. My father never did go back to Ireland; indeed, in 1957, eight years before his death in 1965, my father also left England never to return. As things turned out, however, it was also many years before my mother went back, and all that had been left in storage was lost.

A number of years after my father’s death my mother bought a cottage near Cork, and thereafter divided her time between London and Ireland. I was staying with her at the cottage one summer in the late 1970s when a friend of hers announced that she had a trunk belonging to us which she wanted to return; it had been sitting in their attic since the 50’s.

A battered tin trunk duly arrived with my father’s name, rank and regiment painted on the outside in white. My elder sister has it now and it is, without doubt, the one described in the first chapter of our father’s book A War of Shadows, even down to the grains of sand:

“an old letter, a scrap of notepaper smeared with the sweat of one’s hip-pocket, the rain-spattered pages of a diary, an operational report written in the bloodlessly forbidding vocabulary of a headquarters’ clerk – these relics, discovered in a tin trunk which still creaks with grains of sand when you open the lid…”.

My mother opened and unpacked it, and said to me, “I think you’d better have these”. Amongst the things inside it were my father’s original diary, already entitled Ill Met by Moonlight, in remarkably good condition and perfectly legible, and the two German pennants.

It was a heart-stopping moment. My mother gave these things to me, and I gratefully and unthinkingly received them. I was in my mid-twenties then. The diary I still have. As for the pennants, they were much prized, and adorned a wall in my house for nearly 15 years.

But one day about 17 or 18 years ago, when I was re-reading IMBM, it dawned on me for the first time that in fact since it was Paddy who had taken them as trophies from the General’s car, they were rightfully his. So I gave them to him. This was in the early 90’s. Paddy was completely astonished, and moved, to see them again, so unexpectedly, after 50 years! He was awfully pleased, and after his death they were donated to the Folklore Museum in Rethymno, in accordance with his wishes.

And now they are back in Crete, which is absolutely as it should be.

Articles about the kidnap in the Ill Met by Moonlight category