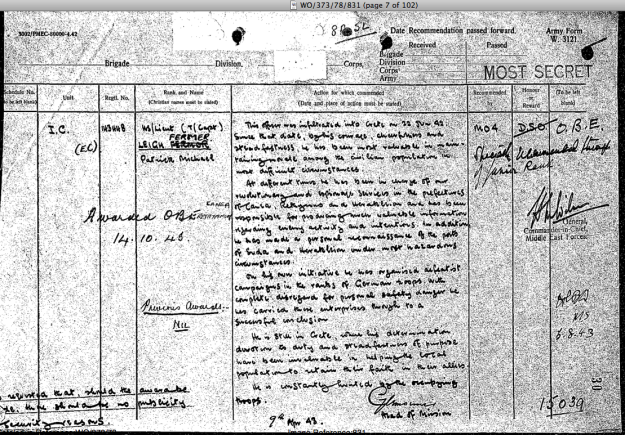 It is clear the original intention was to award Paddy a DSO, but that was struck out in favour of an OBE. Paddy was later awarded the DSO for his part in the Kreipe abduction. Interestingly they had difficulties with his surname … Fermor is crossed out and replaced by Fermer!

This officer infiltrated into Crete on 22 Jun 42. Since that date, by his courage, cheerfulness and steadfastness, he has been most valuable in maintaining morale among the civilian population in most difficult circumstances.

At different times he has been in charge of our revolutionary and espionage services in the prefectures of Canea, Rethymnon and Heraklion and has been responsible for providing much valuable information regarding enemy activity and intentions. In addition he has made a personal reconnaissance of the ports of Suda and Heraklion under most hazardous circumstances.

On his own initiative he has organised defeatist campaigns in the ranks of German troops. With complete disregard for personal safety … he has carried these enterprises through to a successful conclusion.

He is still in Crete, where his determination, devotion to duty, and steadfastness of purpose have been invaluable in helping the local population to sustain their faith in their allies.

He is consistently hunted by the occupying troops.

(requested that should the award be made there should be no publicity for security reasons.)

The source for this is the Kew public records office. This is not in Paddy’s SOE file. 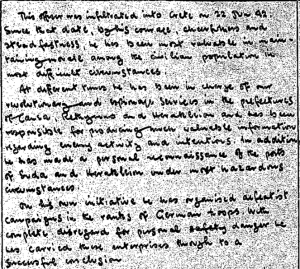